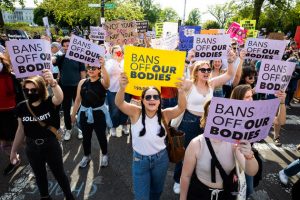 More than 1,000 protestors attend an abortion-rights rally in front of the Capitol in Salt Lake City on Thursday, May 5, 2022. Organizations that provide or advocate for women’s reproductive health care have been planning for years for the possibility that Roe v. Wade, the landmark Supreme Court decision that established a constitutional right to abortion, could be overturned.

Overturning Roe
Does Not End Abortion

Politico obtained what it says is a draft decision that the Supreme Court is striking down Roe v Wade, the case that legalized abortion in 1973.

If the document is authentic, Justice Samuel Alito has written the initial draft majority opinion, Politico reports, concluding this: “We do not pretend to know how our political system or society will respond to today’s decision overruling Roe and Casey (Casey: 1992 landmark decision supporting Roe v Wade). And even if we could foresee what will happen, we would have no authority to let that knowledge influence our decision. We can only do our job, which is to interpret the law, apply longstanding principles of stare decisis, and decide the case accordingly.

We therefore hold that the Constitution does not confer a right to abortion.”

Alito further writes, “Roe (1973) and Casey (1992) must be overruled, and the authority to regulate abortion must be returned to the people and their elected representatives.”

Alito notes that for the first 185 years after the adoption of the Constitution, each state was permitted to address the abortion issue according to the will of its citizens. In 1973, all that changed.

He writes, “Even though the Constitution makes no mention of abortion, the Court held that it confers a broad right to obtain one. It did not claim that American law or the common law had ever recognized such a right . . .” Alito agreed with Justice Byron White’s 1973 dissent of the opinion saying it represented the “exercise of raw judicial power.”

In 98 pages, Alito gives sound reasoning and a compelling history of how the states handled the question of abortion prior to 1973 and how they are dealing with it today. If this decision is final, it rightly interprets the Constitution’s Tenth Amendment: “The powers not delegated to the United States by the Constitution, nor prohibited by it to the States, are reserved to the States respectively, or to the people.”

The decision would grant the states the authority to decide whether abortion should be legal in that state. The entire debate shifts to the states and away from the U.S. Constitution. This means the overturn of Roe does not end abortion—it kicks the debate to another level.

Politico says it obtained the draft decision from a source familiar with the Mississippi abortion case brought before SCOTUS. This has sparked debate over why it was released and whether the pro-abortion Democrats will use it as justification to pack the Court with liberals to overturn this particular decision.

America’s Declaration of Independence reaffirms Christ’s words, saying that all men (all mankind) are endowed by their Creator with certain unalienable rights, “that among these are Life, Liberty and pursuit of Happiness.” This decision will not end the debate on the right to life of the most vulnerable and innocent. Instead, it will fuel it in all 50 states.

Believers (the Church) must be prepared to do a better job instilling God’s law into the hearts of people.

Why SCOTUS and ABORTION Now?

Call me suspicious but something is “rotten in Denmark” as they say. The timing of this “abortion leak” has me thinking there’s a bit more afoot here than we might suspect.

Notice this is happening just as things are heating up in the crucial run-up to the 2022 elections. Is there a connection? In most states, the primary elections, in which the two major parties select their candidates for office, is next month (June). We saw in 2020 how Satan can dramatically take over an American election with perfect timing!

From a prophecy perspective, the hour is late and Satan knows it. The devil can’t afford a set back at this critical point in his take over of America. For the enemy, Joe Biden is just too perfect to lose right now and he’ll continue to need all the political help in the congress around him in order for the devil’s plans to keep moving forward.

In the New Testament, Satan is called “the god of this world,” and the “prince and the power of the air.” Does Satan have the deceptive capacity to pull this off? With one hand tied behind his back. He hates life and loves death! He hates light and loves darkness!

Satan intensely opposes what God is doing in this world and killing the unborn, just like killing Jews is part of his murderous nature.

Since 1973, over 75 million unborn U.S. citizens were deprived of their God-given and constitutional right to life. Back in ’73, liberal left political forces marshalled enough clout on the U.S. Supreme Court to conjure up an unlegislated law of the land. This was a political move to consolidate a Democratic base of extremists 49 years ago.

That was then. Now in 2022, the leaked draft of Justice Samuel Alito’s majority opinion overturning Roe v Wade and Doe v Bolton smacks of yet another political move for Democrats to stir up such animus among extremists that they will turn around a vital midterm election that is going against them and to provide fodder to pack the court with judicial activists.

In-other-words, as if on cue, this could be the momentum booster the lagging democratic party is looking for.

Evil politicians, their media minions and even religious leaders cost lives as they pursue their prideful existence. Christ said in Luke 17:2,

“It were better for him that a millstone were hanged about his neck, and he cast into the sea, than that he should offend one of these little ones.”

Christ is the one who died to give all mankind eternal life. Abortion is death. Life is the way of Christ.

God’s law written on our hearts is the SUPREME LAW that is supernaturally built into every human at conception that separates man from animals by making man in the image of God. The reason why God instituted capitol punishment for murder, after the flood, was because taking human life was blotting out the image of God that was put in man by God Himself.

Whoever sheds human blood, by humans shall their blood be shed; for in the image of God has God made mankind.
Genesis 9:6

When the SCOTUS investigation finishes revealing the truth behind this leak, we may well find that it was a planned political assault on this Constitutional Republic aimed at retaining power and retaining the death cult to which these radical dissenters ascribe.

As our Lord said, “may a millstone be hanged around their necks!”