Get Ready for the Star Spangled Black Lives Matter in America!

What in the world is wrong with our Christian leaders and pastors today? Why in God’s name would they stand in solidarity with an organization that seeks the destruction of America and Christianity and the President?

In a Satanic Sleight of Hand, Black Lives Matter moves off their racism narrative and all-of-a-sudden announces their true purpose is to call for the resignation of President Trump saying, “our goal is to get Trump out.” How long will our Christian leaders continue to let non-Christian, non- elected usurpers lead them and continue pandering to the pretensions of these overlords? Where will the insanity stop? 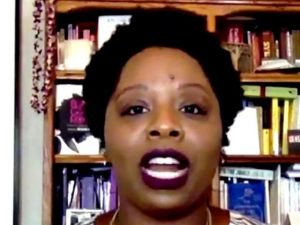 Appearing Friday on CNN’s The Lead, Black Lives Matter co-founder Patrisse Cullors said President Donald Trump should resign from office immediately and said, “our goal is to get Trump out.”

Slavery is a despicable, horrific, soul-destroying deviation of God’s will for mankind and, sadly, a tragic historical truth of American past. But America and all that America offers is still the best deal in the world.

A nation driven by chaotic politics and culture with calls for dismantling law and order and police departments cannot stand long.

Soon, we’re likely to see the Big Government Guns stomp into the picture, bringing solutions to this ugly chapter and it won’t be pretty! This is where America’s headed if we don’t wake up. God hasn’t called us to sit back and be quiet as we watch America burn. The leadership of BLM hates Trump and now admit that their campaign of anarchy is meant to remove him from office.

Of course they hate Trump! All anti-Christian forces in America and around the world hate Trump because they’re all energized against him by the “dragon that deceives the whole world” – Revelation 12:9.

In an interview Friday with CNN’s Jake Tapper, Cullors said, “Trump not only needs to not be in office in November but he should resign now. Trump needs to be out of office. He is not fit for office. And so, what we are going to push for is a move to get Trump out. Our goal is to get Trump out.” Believers need to pray for America and vote for Christian values in November. The stakes have never been higher! And please pray for President Trump that the Lord will surround him with protecting angels and guard him from the evil forces trying to bring down this great nation! Even so come, Lord Jesus! 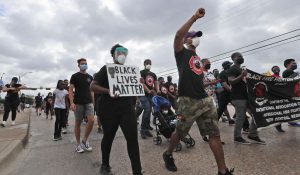