Wormwood Hits Earth! NASA Warns The Asteroid Of Revelation 8 May Already Be Heading To Earth? 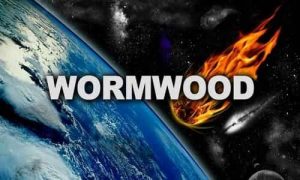 The third Trumpet judgment in Revelation 8 speaks of Wormwood, a “star” that falls from the heavens, poisoning the waters and killing many people. Wormwood is an ancient word for a poisonous plant (Jer. 9:15; 23:15).

10 The third angel sounded his trumpet, and a great star, blazing like a torch, fell from the sky on a third of the rivers and on the springs of water— 11 the name of the star is Wormwood. A third of the waters turned bitter, and many people died from the waters that had become bitter.

Revelation 8:10-11
Is Wormwood already headed toward Earth? What’s more, do government officials already know the answer to that question?

Perhaps you’ve heard about the asteroid Apophis. According to NASA, it’s scheduled to enter our atmosphere on Friday the 13th, in April of 2029…
8 short years way!

Traditional scholarly interpretation for the timeline of the Trumpet Judgments have them playing out in years 3-5 of the 7-year Tribulation. That’s saying the judgements basically arrive around the middle of the Tribulation period.