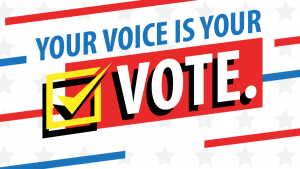 The United States has been going through a particularly difficult time. Some of the problems have been out of our control. But some were brought on by bad choices made by elected officials. Elected officials — that means people we had a hand in choosing. And make no mistake, if you did not vote, you also had a hand in choosing them. Staying home is also a choice — a devastating one.

We all complain when we think the government makes a mistake. But during election season, we can do more than complain. We can act on behalf of our country. We can make a direct difference for our lives and the lives of our children.

For the Christian, voting is more than a privilege. It is a responsibility before God. Churches often talk about stewardship as it relates to money. And they should. That’s an important part of stewardship. But the fact is, we are to be stewards over all the gifts God has given us — including the right to vote. God gave us this precious gift and now we can either throw it in the trash or use it for the good of all.

America stands at a crossroads. Every election becomes more crucial than the last. The dangers grow and the stakes get higher. If you have not voted yet, I urge you to do so. In America, we have no king. We are not ruled by a bloodline. Instead, we are ruled by the choices made during elections. We choose our nation’s direction. That makes the right to vote an enormous responsibility.

If you care about America’s falling morals, its schools, borders, national security, health care, taxes, abortion laws, supporting Israel, the physical environment, or the regulatory environment… you need to vote. If you think voting is too much trouble, remember those who gave their lives to secure and preserve that right. From Valley Forge to Afghanistan, some Americans paid the ultimate price for our right to vote. It is a priceless gift that should not be taken lightly. In fact, if you take it lightly, the radicals in Washington could soon take it away.

Nobody’s asking you to give your life — just some time. Is it really so important? A few years ago, Venezuela was one of the most prosperous nations on earth. They were poised for even greater prosperity. Today, they are a trainwreck. A couple of years ago they had an inflation rate of at least 100,000%. Think about what that does to family savings or to retirement plans. It wipes them out almost instantly. It destroys lives and livelihoods.

What happened to Venezuela? Some people didn’t vote, and many of those who did, allowed themselves to be swayed by selfish desires instead of moral imperatives and love of country.

It would be hard to overstate the importance of our national choices during this election. So, please, for the sake of God and country, for your own sake and that of your loved ones… vote.