Why the Vaccination IS NOT the Mark of the Beast! 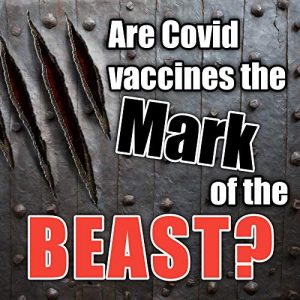 The phrase “Mark of the Beast” can be found in Revelation 13. Some Christians believe if they get the vaccine, they will be marked for hell. This is written in the hope of stopping those rumors.

Why the COVID-19 Vaccine is not the
‘Mark of the Beast’?

He (False Prophet) forced all people, great and small, rich and poor, free and slave, to receive a mark on their right hands or on their foreheads, so that they could not buy or sell unless they had the mark, which is the name of the beast or the number of its name.

1. The biblical mark-of-the-beast is external, not in the bloodstream and must be visibly worn on the outside of the forehead or right hand. The mark is a literal, visible branding of sorts like the Nazi swastika or ISIS headband. It must be displayed and easily seen to function as a passport for commerce.

2. The mark-of-the-beast does not begin until the middle of the 7-year Tribulation. The context of Revelation 13 shows the marking campaign is enforced by the False Prophet who doesn’t begin his evil campaign until the second half of the Tribulation.

The beast was given a mouth to utter proud words and blasphemies and to exercise its authority for forty-two months.

Nor do the logos of the World Health Organization or the Centers for Disease Control qualify as the mark. Only the False Prophet has the authority to implement such a devious program.

He (False Prophet) exercised all the authority of the first beast on its behalf and made the earth and its inhabitants worship the first beast, whose fatal wound had been healed.

4. According to Revelation 13:17-18, it is mandatory for the mark to brandish at least one of two required statements:
They could not buy or sell unless they had the mark, which is the name of the beast or the number of its name.

Here we see that the mark can either display the name of the beast or it can simply exhibit the number associated with the beast which equates to 666. The COVID vaccination does not contain either of these required statements.

5. The purpose of the mark-of-the-beast is to pledge allegiance and to outwardly show ones full submission to the beast. The “beast” is a symbolic term for the empire of Antichrist. Wearing the mark has absolutely nothing to do with any kind of medical treatment for a pandemic or disease.

6. The beast in this context refers to the final, 10-king empire which is ruled over by Antichrist in the Tribulation. Beginning in Daniel 2 through Revelation 17, the 10-king empire (beast) is mentioned or alluded to some 20 times showing it is a crucial sign of the last days. But neither the empire nor the Tribulation period have arrived yet making it impossible for the vaccination to be the “mark of the beast!”

Daniel 7:23 further tells us that the empire (the beast) will rise up in the last days BEFORE Antichrist makes his first appearance in the world. Since the empire hasn’t arrived yet, neither has Antichrist or the False Prophet. All three must be in place as prerequisites to the start of any kind of marking campaign.

7. Everyone will know precisely when they are taking the mark. The life and death conditions and dangerous atmosphere surrounding the campaign are public not secret. The death penalty for not taking the mark makes it impossible to take it accidently like some are trying to infer is happening by taking the vaccination.

To ensure everyone gets the message, the Bible says God sends out an angel who flies through the heavens with a loud voice saying, “DON’T TAKE THE MARK OF THE BEAST.” So if you take the mark, there will be no excuse that one is choosing to worship Antichrist and not Jesus Christ.

9 A third angel followed them and said in a loud voice: “If anyone worships the beast and its image and receives its mark on their forehead or on their hand, 10 they, too, will drink the wine of God’s fury, which has been poured full strength into the cup of his wrath. They will be tormented with burning sulfur in the presence of the holy angels and of the Lamb. 11 And the smoke of their torment will rise for ever and ever. There will be no rest day or night for those who worship the beast and its image, or for anyone who receives the mark of its name.

Lastly, it helps to remember that according to 2 Thessalonians 2, Christians will not see Antichrist. The One who “holds back” Antichrist is none other than the Holy Spirit. When the restraining influence of the Spirit is removed from this world—along with the church that the Spirit indwells—then  Antichrist will have free rein.

Evil is being hindered right now by the powerful presence of the Holy Spirit in the life of believers all over the world. But once the church-age ends the obstruction will be removed allowing the man of sin to come forth.

Without Antichrist here yet, the mark can not be here. The special promise to the church is that Antichrist will not be revealed until Jesus returns for the church and catches us up to heaven!

Maranatha… even so come Lord Jesus!