Why Satan Believes He Must Destroy Israel To Defeat God. Review The Enemy’s Past Attempts And Future Plans. 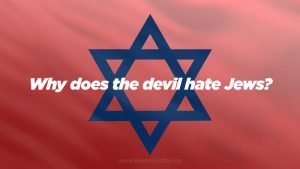 Why Satan Believes He Must Destroy Israel

In our current Series called, The CLASH, we’ve discussed why Satan feels he needs to destroy Israel in order to defeat God. One of the reasons he feels he must destroy Israel is to prevent fulfillment of the Abrahamic Covenant.

God promised Abraham that He would have descendants forever, who would become believers and God would rule over them.

If Satan can destroy the Jewish Race, he can prove that God is a Promise Breaker not a Promise Keeper.

He will reign over the house of Jacob forever, and of His kingdom there will be no end.

For 4,000 years the Jewish people have faced relentless persecution, opposition, and attempts to annihilate and destroy them; and in the future, the struggle against Israel will continue.

If it concerned any other people, this campaign would seem irrational. However, with Israel, a rational but very Satanic strategy sustains this animosity.

Let’s review some of his attempts.

Abraham went to Egypt and lied about Sarah, nearly causing Pharaoh to violate her — Genesis 12:10–20

Pharaoh ordered all male Hebrew infants to be murdered — Exodus 2

The Babylonian army destroyed the Temple and Jerusalem — 2 Chronicles 38

The Jewish people were scattered and persecuted throughout the world for 2,000 years — Luke 21:24

Hitler organized the Holocaust and destroyed over six million Jews.

The Jews attempted to return to Israel against extensive international opposition led by Great Britain.

Israel declared its independence on May 14,1948 and one day later on May 15 was invaded by Egypt, Jordan, Iraq and Syria.

Israel was invaded two more times in 1967 and 1973 by all its surrounding neighbors.

Israel has been disrupted by numerous intifadas from Palestinians and Jihadists.

Hamas has hurled tens of thousands of rockets from Gaza into Israel.

From Bible prophecy, we understand that there is no let-up in Satan’s campaign to destroy Israel.

Satan is cast out of Heaven and attempts to destroy Israel in the wilderness — Revelation 12:13–17

Antichrist brings the armies of the world against Jerusalem and Israel in Armageddon — Zech. 12:1–3

For Satan, the destruction of Israel is a matter of self-preservation. Ultimately, the survival of Israel results in the eternal damnation of Satan. How can this be? Because when Israel repents and nationally invites the Lord Jesus Christ to be its Redeemer, that generation of Israel will be saved, and Satan’s plan to destroy the Jews will finally be defeated.

Christ will return to the Earth, destroy Antichrist and his armies at Armageddon, establish His Kingdom over Israel and the world for 1,000 years, and then cast the still rebellious Satan into the Lake of Fire forever and ever. (Rev. 20:10)

The key is that Israel must survive to receive Christ nationally as their own Messiah. As Jesus said when He lamented over Jerusalem at His First Coming:

For I say to you, from now on you shall not see Me until you say, ‘Blessed is He who comes in the name of the Lord’!

From Satan’s point of view, he must keep Israel from surviving the point when they will be ready to receive Jesus as their Messiah.

Satan wants to destroy Israel so that he can rule the world from Jerusalem and keep God from sending him to eternal damnation. But God will not allow Satan to destroy His chosen people. Israel is the apple of God’s eye and will survive just as God promised!