When Prayer Outperforms The Occult! 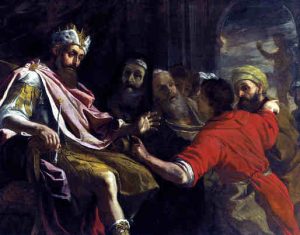 When Prayer
Outperforms The Occult
Daniel 2

“Now in the second year of the reign of Nebuchadnezzar, Nebuchadnezzar had dreams; and his spirit was troubled and his sleep left him. Then the king gave orders to call in the soothsayer priests, the conjurers, the sorcerers, and the Chaldeans, to tell the king his dreams.”

God is not pleased with the occult or paranormal, although it is soaring today!

And we learn that it’s been soaring since the time of Daniel the prophet where we see an entire division in the Babylonian government dedicated to practicing the occult. They were the “wise-men” whom Nebuchadnezzar turned to for help with interpreting his dream.

The king’s dream woke him up in the middle of the night and he couldn’t go back to sleep. So he called for his astrologers, sorcerers, magicians and enchanters to help interpret his troubling dream.

These men served the king as his advisors and counselors who relied on the occult and were trained to tap into the demonic. They used incantations to try to intercept messages and decipher things from the demonic realm. All of which are forbidden practices of God’s people (Duet. 8:10-12).

But the wise men ended up being of no value to the king. However, the prophet Daniel rejected the path of the occult and turned to prayer instead. In the midst of a major crises, Daniel and his three friends poured their hearts out to the Lord who answered them and God  intervened by revealing the king’s dream to Daniel.

Witchcraft is disturbingly popular today but prayer takes us into the Throne Room of God.

Why are Christians being oppressed to the point they cry, “deliver us from evil”? Dark forces are clearly stepping up their game here in the last days, and the target seems to be Christians, especially those who are living for the Lord and telling the truth about God’s plan for the end of the Church Age.

Be assured that the Name of Jesus Christ drives away the demonic. We don’t have to fear!
But the Lord is faithful, and He will strengthen and protect you from the evil one.
2 Thessalonians 3:3

The wise-men were of no value to the king, but God revealed the king’s dream to Daniel through prayer, in order for us to know about the things to come.
There is a God in heaven who reveals secrets, and He has made known to King Nebuchadnezzar what will take place in the latter days.