WE CAN’T BREATHE: America Under Siege: Anarchy, ANTIFA and Protests

America wakes to stunning carnage in over 30 states as tyranny, anarchy and lawlessness flow into the streets. 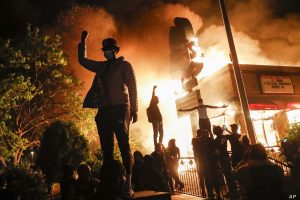 Police cars and government buildings burned, the National Guard was deployed, and some of the country’s largest cities instituted curfews.

In one Midwest city, a person was killed and at least two more shot. More than 1,400 people have been arrested in 16 cities since Thursday, with more than 500 of those happening in Los Angeles on Friday, the Associated Press reported. 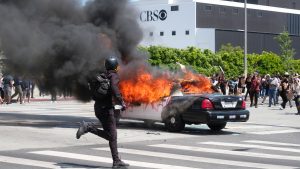 Demonstrations across the country again devolved into unrest Saturday, a day after a Minneapolis police officer was arrested and charged with the third-degree murder and manslaughter of George Floyd.

Just as in past years, an organic protest over unjust use of force by police has once again been hijacked, weaponized and unleashed back on American cities, causing a mind-numbing degree of carnage, death and destruction.

And as in past flare-ups, we see once again George Soros, his Open Society Foundation, and their twin pit-bulls of ANTIFA and Black Lives Matter stirring the pot. These people are serious, they are dangerous and in many cases, in my view, are motivated by demonic activity.

The Apostle Paul warned about the deteriorating  conditions of mankind in the end times saying,

“evildoers will go from bad to worse, deceiving and being deceived” (2 Timothy 3:13).

He also made the alarming prophecy that man’s personality would change for the worse and man’s temperament would decline as we approach the return of the Lord.

If you’re a prophecy watcher, you’ve noticed this happening in dramatic fashion in the last decade! And now that’s what seems to be playing out in the display of anarchy, anger and lawlessness in the streets of America this weekend.

People are changing… and getting worse.

“There will be terrible times in the last days. 2 People will be lovers of themselves, lovers of money, boastful, proud, abusive, disobedient to their parents, ungrateful, unholy, 3 without love, unforgiving, slanderous, without self-control, brutal, not lovers of the good, 4 treacherous, rash, conceited, lovers of pleasure rather than lovers of God.” 2 Timothy 2:1-4

On the surface it purports to be just protests over the unjust killing of George Floyd, but after 4 days of rioting in the streets, no one watching believes that anymore. It becomes more apparent to me that Satan is behind this and is doing everything he can to shake this country and weaken it.

The country is worn out from COVID-19 and the church is weakened from not meeting together resulting in the loss of fellowship and drawing strength from one another. So Satan is taking advantage of every opportunity he’s given.

A Call To Prayer As Christians, God hasn’t called us to sit back and be quiet. The greatest weapon and the most powerful defense we have is prayer. Our country needs prayer in a critical way.

We need to pray for PEACE, because “the anger of man does not produce the righteousness of God” (James 1:20).

We need to Pray for PERSPECTIVE, because “the wisdom from above is first pure, then peaceable, gentle, open to reason, full of mercy and good fruits, impartial and sincere” (James 3:17).

We need to Pray for PATIENCE, because of God’s “kindness and forbearance and patience” toward us all (Romans 2:4). And we need to pray for an OUTPOURING of His wisdom and direction for our leaders and officials who are dealing with this crisis. Ask God to change hearts and heal this divide in our nation.