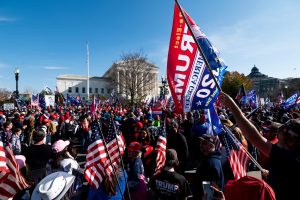 Here’s Where The 2020 Election Stands Today

SCOTUS has given the above 4 states until TOMORROW (Thursday) at 3 PM to respond to allegations of irregularities filed by a Texas led group of these 9 courageous states:

This has the potential to be the last stop on the Trump reelection train! A victory here could overturn the Biden STEAL. And a loss could be fatal to President Trump’s reelection! As believers, we must trust that God is still in charge and will make the final decision as to who He wants to be the next President. No one can usurp God’s sovereign plans for America and the last days. The Lord’s plans are certain and they’ve been declared before the foundation of the world.

Several websites like – thegatewaypundit.com and citizenfreepress.com are great places to get your news. OAN TV and Newsmax has been providing the best TV coverage so far during the ups and downs of the election fiasco. Newsmax had Jordan Sekulow on last night. The link to his excellent explanation is below.

A total of 8 other states have joined Texas in their suit which now is being fast-tracked before SCOTUS and SCOTUS has given the 4 states PA, GA, MI, and WI until tomorrow (Thursday) at 3 pm to respond.

The 2 main issues brought up in the 100 page indictment against the 4 states are: Due Process and Equal protection. State legislatures are the ones who can change election procedures and no one else. Those 4 states violated that law. If SCOTUS rules in favor of TX and the other plaintiff states, the legislatures of those states get to pick the electors. Republicans are in majority in all 4 states.