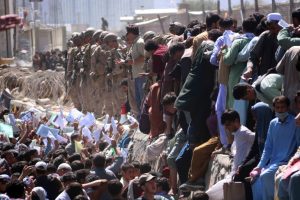 epa09430527 Afghans struggle to reach the foreign forces to show their credentials to flee the country outside the Hamid Karzai International Airport, in Kabul, Afghanistan, 26 August 2021. At least 13 people including children were killed in a blast outside the airport on 26 August. The blast occurred outside the Abbey Gate and follows recent security warnings of attacks ahead of the 31 August deadline for US troops withdrawal. EPA-EFE/AKHTER GULFAM 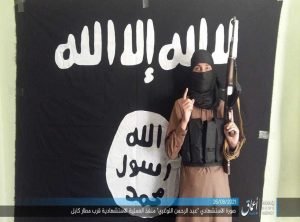 The first blast was caused by an ISIS suicide bomber in a vest, detonating outside The Baron Hotel, where Westerners were staying before their evacuation flights.

A second explosion was reported nearby a short time later at the airport’s Abbey Gate, where crowds of Afghans have been gathering for more than a week in the hope of being put on one of the evacuation flights out. That explosion was caused by a car bomb, according to unconfirmed reports.

Pentagon Press Secretary John Kirby tweeted there were a ‘number of US & civilian’ casualties. 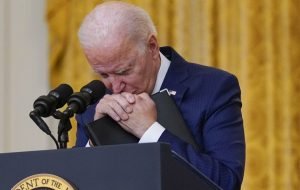 This is a Day of

Our Commander in Chief has failed the nation, and this horrifying story is still unfolding.

This is a sad day and our nation is in big trouble as God’s hand of protection and mercy is removed for all the world to see! 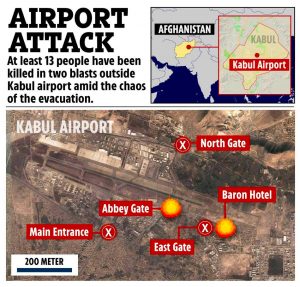 Thousands of people have gathered at the airport over the past 12 days hoping to be evacuated after the Taliban seized power.

At least 90 Afghans have been killed and 140 other people hurt in the attacks, the Wall Street Journal reported.

Thirteen US service members were killed, including 12 Marines and one Navy medic, while 15 were injured.

Officials said it was highly likely that Brits were among the dead.

The attacks made for America’s deadliest day in Afghanistan in 10 years – and Republicans claimed US President Joe Biden had “blood on his hands”.

The blast carnage at the airport comes as…

The Taliban have not honored their previously agreed upon timeline, and bombs at Karzai International Airport are leaving women, children, and others in danger. This is a critical time for the body of Christ to pray for the Afghan people.

We are believing for a Red Sea moment to come to believers in Afghanistan, protecting them from the enemy, and bringing them onto new ground with divine strategy.

We are calling prayer warriors to fast and pray as this Hour has come.

Here’s how you can pray:

*Fast and pray for miracles within the Afghan underground church and especially for those who the Taliban are seeking in the rural towns to kill and rape. (Luke 18:27)

*Pray for the body of Christ in Afghanistan to stand firm in their godly inheritance (Ephesians 1: 9-23)

*Pray for miraculous protection for women and children being forcibly taken and those that have already been taken for their protection, salvation, and deliverance. (2 Thessalonians 3:1-5)

*Pray for new hope for the believers and unbelievers. (Psalms 46:1-3)

Thank you for joining us in this critical hour!