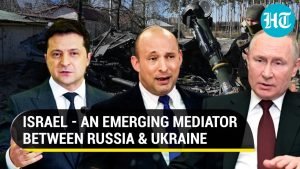 In the months and weeks that led up to Russia’s Feb. 24 invasion of Ukraine, Western powers signaled clearly that they were prepared to accept the disappearance of Ukraine as an independent state.

But once Russian forces invaded, the West’s plans to yell a bit and look away went awry. The Ukrainians failed to play their assigned role of Paschal lambs. Instead, they rallied around their flag and their president, Volodymyr Zelensky.

For his part, Zelensky captivated the hero-starved West. His rejoinder, when the Biden administration offered to evacuate him from Ukraine on the second day of the war, “I don’t need a ride, I need ammunition,” reminded Americans of a time when they weren’t being attacked for being transphobic or systemically racist, a time when patriotism was permitted.

Once Americans and other Western audiences got a whiff of Ukrainian nationalism, it became politically impossible for Washington, Brussels, Berlin, Paris and London to turn their backs on Kyiv. And so, with little deliberation, Biden and his European counterparts announced a series of unprecedented financial and economic
sanctions on Russia and massive shipments of arms and humanitarian aid to Ukraine.

For a moment, it was possible to wonder whether Russia’s reminder that the problems of the world cannot be reduced to the pronouns one uses or the amount of carbon one burns on an average day would change the focus of Western elites. But it was not to be. The ruling classes in Brussels and Washington made clear that the war in Ukraine would not steer them off course.

While Poland is giving refuge to nearly two-thirds of the 3 million Ukrainians who have fled their homes, and Hungary has taken in 10% of them, the E.U. parliament passed economic sanctions against both nations last week. Their crime? The nationalist governments in Warsaw and Budapest refuse to toe Brussels’ line on Muslim immigration and LGBTQ indoctrination.

Russia can expect to receive $10 billion developing Iran’s nuclear installations and billions more in arms sales. The implications for Ukraine are clear: The US is willing to let them fight the Russians, but will not help the Ukrainians defeat Russia, because the United States cares more about empowering Iran than helping Ukraine survive.

The deal that Biden is concluding with Iran is itself a stunning testament to the radicalism of the Biden team and its refusal to let reality interfere with its policies. It will provide Iran with $90 billion from sanctions relief. That astronomical sum guarantees massive cash infusions into the coffers of Iran’s in-house global terrorist organization–the Islamic Revolutionary Guards Corps, which Biden is set to remove from the State Department’s list of foreign terrorist organizations–and to Iran’s terror armies in Lebanon, Yemen, Iraq, Syria and the Gaza Strip.

Iran will have the funds to expand its missile and drone capabilities. And thanks to the lax restrictions it will face on its nuclear operations, it will become a nuclear threshold state by 2025 at the latest.

Although the West’s progressive agenda necessarily limits the support it is willing to provide Ukraine, the West’s ruling classes need to placate their publics, who admire Ukraine, compelling them to provide significant if not determinative military, humanitarian and political assistance to Kyiv. And given Ukraine’s willingness to fight it out with Russia, that support may be sufficient to enable Ukraine to withstand Russia’s assault for long enough to maintain its independence.

The widespread assessment today is that the Ukrainians will be able to continue fighting, despite Russia’s clear military superiority, for another month or six weeks. Given the high losses the Ukrainians are inflicting on the Russians, and assuming that the Russians begin to feel the full impact of the economic and financial sanctions within the next two to three weeks, it is possible that by mid-April, the Ukrainians will be able to negotiate ceasefire terms with Russia that will leave the country independent and more or less intact.

There is a moral to this story for Israel.

Ukrainians can still hope for and expect a future of freedom and independence because they have refused to bow before either Russia or to the West.

If Israel were paying attention to the dynamics at work in the West’s behavior towards Ukraine, it would be adopting policies opposite to those it is currently pursuing, both in relation to Ukraine and Russia and in relation to the West.

Unlike Zelensky, who hasn’t hesitated to call the United States and Germany out for their fence-sitting, the Bennett-Lapid-Gantz government has subordinated all Israeli policies to the Biden administration’s agenda.

If Israel were putting its own interests first, as Zelensky has, Prime Minister Naftali Bennett wouldn’t be trying to mediate between Zelensky and Putin. Instead, Israel would make do with a simple but clear message: Israel supports Ukraine’s sovereign independence and territorial integrity and calls on Russia to end its offensive operations.

Israel ought not and need not go beyond that statement.

The reasons for this are obvious. This is not Israel’s war, and words have consequences. Israel cannot mediate this conflict because it has no leverage over either actor to persuade them to compromise.

As for the significance of words, in order to succeed, a mediator has to be perceived by both sides as someone who accepts the basic legitimacy of their positions. But as a threatened democracy, it is a dangerous proposition for Israel to accept Russia’s view that Ukraine has no right to exist as an independent and distinct nation-state.

When the next round of “mediation” between Israel and the Palestinians begins, how will Israel be able to demand that any prospective mediator reject out of hand the Palestinians’ position that the Jewish state has no right to exist?

Instead of processing their applications, the Foreign Ministry is giving them appointments at consulates and embassies in Warsaw, Budapest and Bucharest three and six months from now and filling planes with non-Jews instead. Non-Jewish Ukrainians, it bears noting, have no problem resettling in the countries bordering Ukraine and throughout Europe. Yet, as 10,000 Ukrainian Jews are forced to wait for months to come to Israel, 10,000 non-Jewish Ukrainians have been airlifted to Israel.

This brings us to Israel’s real problems–Iran, the Palestinians and the Biden administration.

Zelensky’s fierce defense of his country, and the Ukrainian people’s refusal to stand down in the face of Russia’s advance, have compelled the Biden administration to support Ukraine even at the risk of a world war because the Ukrainians are standing for the values of freedom and independence that the United States is supposed to personify on the world stage.

If Israel were to take a page from Ukraine’s playbook, its leaders would be attacking the immorality of the Biden administration’s capitulation to Iran’s demands in the appeasement talks in Vienna.

The Bennett-Lapid-Gantz government’s silence in the face of Biden’s abdication of moral and strategic leadership in the Middle East undermines the efforts of Israel’s supporters in Congress and the international community. The Republicans, for instance, are compelled to explain why they are more opposed to Biden’s capitulation to Iran than the Israeli government is.

Then there are Israel’s Arab partners. The Saudis and the Emiratis have been more outspoken in their opposition to Biden’s Iran policies than Israel. The Arab leaders in the Gulf look at the silent, supine Israeli government in astonishment and distrust. The strategic consequences are already tangible. Rather than redouble their cooperation with Jerusalem, the Saudis and the Emiratis are setting their sights on Moscow and Beijing.

The situation with the Palestinians is also disturbing, and speaks clearly to the destructive implications of Bennett’s decision to play mediator between Russia and Ukraine.

Two weeks ago, Congress passed an omnibus spending bill, which Biden signed. With AIPAC’s support, the bill contained a section on Israel that significantly downgraded the U.S. commitment to the Jewish state.

The section on Israel was an amended version of a law that passed initially in 2012, and required the United States to “assist” and “support the Government of Israel” in its ongoing talks with the Palestinians. The new law deleted the part about supporting Israel. Under the new law, the United States is obligated to support “a negotiated solution to the Israeli-Palestinian conflict resulting in two states living side by side in peace, security, and mutual recognition.”

In other words, under the amended law, the United States is committed to supporting the establishment of a Palestinian state, whether Israel supports it or not.

Sen. Ted Cruz has fought since last July to block the passage of this amendment because he recognized the damage it was liable to do both to U.S.-Israel ties and to Israel’s national security. The Israeli Embassy, on the other hand, was less concerned.

Senate sources explain that Israel’s diplomats were nowhere to be found as Cruz fought adoption of the amendment.

The worst aspect of the amended law is that it wasn’t initiated by the usual anti-Israel forces in the so-called “Squad.” AIPAC supported the amendment, and so did mainstream Republican senators, like the ranking Republican on the Senate Foreign Affairs Committee, James Risch, and Sen. Rob Portman.

The implications are clear. When Israel opts to remain silent as its interests and position are undermined, not only does it strengthen its enemies, it loses its friends.

After Russia invaded Ukraine, many Ukrainians told Israeli reporters on the scene that they were inspired by Israel, which has always fought its own battles and survived even in the face of global indifference and hostility. Today, the opposite should be the case. 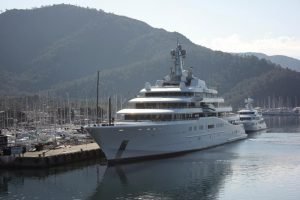 A view of Eclipse, a luxury yacht belonging to Russian businessman Roman Abramovich, recently docked at a port in the resort of Marmaris, Turkey. (IHA via AP)

A Russian pair of yachts belonging to Chelsea soccer club owner and sanctioned Russian oligarch Roman Abramovich have docked at resorts in Turkey, according to the Associated Press.

Turkey has not imposed economic sanctions on Russia over its invasion of Ukraine last month, nor has it frozen assets belonging to top Russian businessmen linked to Russian President Vladimir Putin.

The private DHA news agency said Tuesday the Bermuda-registered Eclipse docked in the resort of Marmaris.

A day earlier, Abramovich’s Bermuda-flagged luxury yacht My Solaris arrived in the nearby resort of Bodrum, triggering a protest by a group of Ukrainians who boarded a small motorboat and tried to prevent the yacht from docking.

NATO member Turkey has close ties to both Russia and Ukraine. It has criticized Moscow’s invasion of Ukraine but has also positioned itself as a neutral party trying to mediate between the two.