U.S. Petrodollar Weakening Ahead of the Tribulation Period 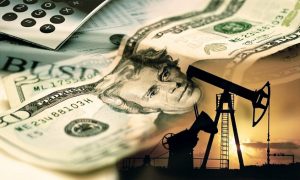 U.S. Petrodollar Weakening
Ahead of the Tribulation Period

The decline and fall of America is a biblical and prophetic necessity in order for God to deal with Israel alone during the coming 7-year Tribulation period. It’s sad sitting in a front row seat and watching it happen but God’s sovereign plan to redeem Israel takes precedence over all else in the last days.

That said, it stands to reason that the U.S. Petrodollar, one of the pillars upholding the U.S. economy must come to an end prior to the start of the 7-year Tribulation.

In 1971 a deal was struck between OPEC and the United States in which every barrel of oil purchased in the global marketplace would be bought with U.S. dollars. Any country, therefore, wanting to buy oil must have first exchanged its currency for U.S. currency. This “Petrodollar” system has created an artificial demand for the dollar as global oil demand has increased.

This has been responsible in large part for the US dollar’s relative strength over the last several decades, and thus also supporting Americans’ high standard of living.

Nothing better illustrates the utter ineptitude of the Biden administration’s dealings with the Middle East than Saudi Arabia’s decision to forge a strategic alliance with China.

Biden set the tone for his strained relationship with the Saudi royal family during the 2020 presidential election contest when he denounced the kingdom as a “pariah” state over its involvement in the murder of Saudi dissident Jamal Khashoggi in Istanbul in 2018.

By any standard, the deepening military cooperation between Russia and Iran should serve as a wake-up call to the Biden administration to redouble its efforts to reaffirm its commitment to key allies in the region such as the Saudis, who are committed to resisting any attempt by Tehran to expand its influence in the region.

That the Saudi’s are now moving away from its traditional alliance with the U.S. and strengthening its ties with Beijing is a strategic disaster of epic proportions, and serves as a damning indictment of the Biden administration’s careless treatment of the Saudis, for which the president is personally to blame. 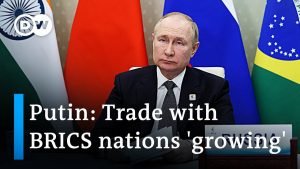 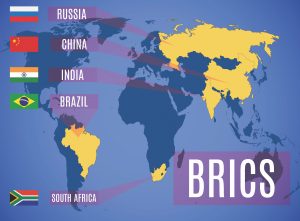 There’s been a steady movement over the last decade to dump the Petrodollar by a substantial International coalition known as BRICS. The anacronym stands for Brazil, Russia, India, China & South Africa.

Thanks to the weak and feckless U.S. administration’s treatment of the Saudi’s, it appears that they also are considering joining this anti-American coalition. It seems the U.S. is moving into yet another danger zone in the vital, world, energy sector.

Group Photo of Heads of BRICS Nations Family now reaches 28 nations including Turkey at the BRICS Outreach Event in Johannesburg (July 27, 2018).
Momentum for BRICS and moving away from the U.S. Petrodollar is growing fast with more eastern and anti-American nations joining the movement every year. 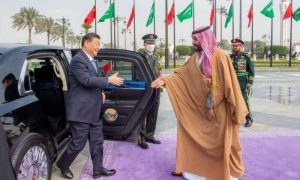 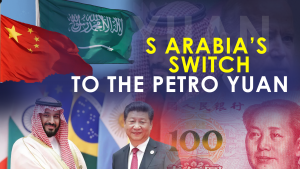 This news item out of Saudi Arabia is a rather significant development in terms of the Petrodollar’s days being numbered.

Chinese President Xi was welcomed in Saudi Arabia with pomp and circumstance, as trade deals were made with Saudi oil being bought in Chinese Yuan, and relations between the Arab oil-rich states and China drew closer.

Today America is living proof that having the world’s most important currency translates into a higher standard of living than most nations.

At one point in our history, our nation’s largest export was a variety of consumer goods. Now our largest export is the U.S. dollar…a dollar that costs us practically nothing to create.

How long will it be before the nations of the world figure out the dollar fiasco is a fraud?

Pray for America! This is but another sign of the soon return of Jesus.