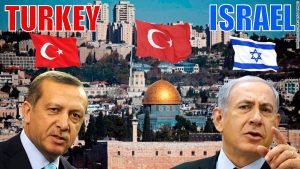 President Erdogan of Turkey feels it’s time to pay back Israel and now he’s calling for an international force to quell Israel’s so-called aggression. The current escalation against Israel began with violent protests by Palestinians on the Temple Mount.

The cry from the beginning of the uprising in Israel was that every Muslim nation should attack Jerusalem. Sound familiar? At the same time massive rallies began taking place throughout Turkey calling for the overthrow of Jerusalem.

This entire war effort against the Jewish State was a premeditated incitement of violence against Israel. Hamas is still firing rockets into Israel from Gaza with some 3000 rockets already sent into Israel. Rockets were also fired from Lebanon and from Syria. Israel responded by targeting Hamas positions in Gaza.

Israeli Prime Minister Netanyahu said that Israel’s campaign in Gaza was continuing at “full force.” Politicians in Israel often do not agree but concerning defending Israel against these rocket attacks everyone is unanimous. Israel is committed to this fight.

Most conspicuously Turkish President Erdogan said that Israel must be taught a “deterrent lesson”. Erdogan called on the UN Security Council to put an international peace keeping force inside of Israel.  And once again, Erdogan also reiterated his position that Turkey should be allowed a seat on the five member state UN Security Council.

My friends, the Turkey versus Israel animosity is no small sign. The antagonism of Turkey for Israel is heating up which will ultimately lead to the Magog Invasion at the end of the Tribulation period.

In a speech this week Turkish President Erdogan called on all Muslim nations to overthrow Jerusalem. In another speech Turkish Foreign Minister Mevlut Cavusoglu said that Turkey had decided to send an international army to Israel for the protection of Jerusalem.

The current uprising is exacerbated through the influence of the region’s two biggest, outside players; Turkey and Iran.

Iran funds Hamas and has long supported Palestinian terrorist groups while Turkey uses every chance it gets to berate Israel.

While the recently signed Abraham Accords have reflected improving ties between Israel and key Gulf Arab states, the Israeli-Palestinian controversy remains unresolved, and both Turkey and Iran cited the dispute in their condemnations of the Abraham Accords last year.

Turkish President Recep Tayyip Erdogan condemned Israel as a “cruel terrorist state” on Saturday, and he said last year that “Jerusalem is our city” as part of his effort to identify the current anti-Israel regime in Turkey with its former Ottoman Empire.

“Iran’s IRGC head Hossein Salami warned last week that Israel was vulnerable to one large tactical operation because the country is so small,” Middle East Center for Reporting and Analysis Executive Director Seth Frantzman wrote Tuesday in the Jerusalem Post. “Hamas is setting the pace – and that pace is being watched and guided from Iran.

This may be due to the fact that Iran’s largest proxy Hezbollah wants to know what it looks like when Israel is faced with a large amount of rocket fire.”

According to Ezekiel 38-39, Turkey, Iran and Antichrist’s coalition of nations will launch their offensive to invade Israel by miscalculating they will be able to overwhelm the Jewish State. Their plan works until God intervenes at the last minute!