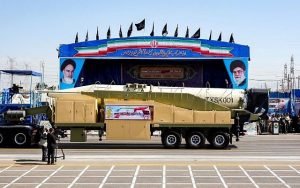 Even as talks to lift sanctions against the Iranian regime are advancing in Vienna, Iranian leaders are openly encouraging Hamas to launch more rockets at America’s ally Israel.

The head of Iran’s Islamic Revolutionary Guard is applauding Hamas’ courage for its attacks and the Ayatollah has been inciting terrorism on Twitter and social media.Not to worry, Biden is trying to figure out how to send Iran more money!

Amidst the Iranian regime’s clear role in inciting terrorism against Israeli civilians, talks to lift sanctions against the regime are advancing in Vienna.

Biden is offering even more concessions and sanctions relief to Iran’s leaders, concessions that go far beyond the nuclear-specific sanctions.

“Palestinians are awake and determined. They must continue this path. One can only talk with the language of power with these criminals. They must increase their strength, stand strong, confront the enemy, and force them to stop their crimes. #FreePalestine”

“Since day 1, Zionists turned occupied Palestine into a base for terrorism. Israel isn’t a country; it’s a #TerroristCamp against Palestinians & other Muslim nations. Fighting this despotic regime is fighting against oppression & terrorism. And this is everyone’s responsibility.”

Twitter’s policy indicates that it will suspend users “due to the risk of further incitement of violence.” But Twitter is two-faced and giving Khamenei full immunity.

Twitter banned President Trump while he was in office “due to the risk of further incitement of violence.” That’s a lie and a joke!

Apparently, Twitter feels the Republican President is more dangerous than a nuclear powered Iran. Even though Iran regularly says that after they destroy Israel, they will be coming after the United States next! No problem! Such Hypocrisy!

Welcome to the end times and the control of Satan over the media and affairs of this world. These are the days where right is wrong and wrong is right!

Don’t ever get used to evil. Keep defending the truth and keep looking up!