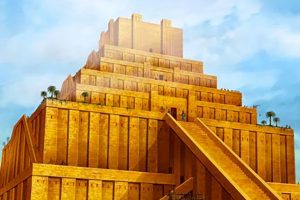 Ken Ham of Answers in Genesis, The Creation Museum, and the Ark Encounter has recently announced plans for the organization to “confront racism” with a new Tower of Babel exhibit.

Answers in Genesis, which is an apologetic organization defending young earth creationism, has not announced an expected date for the exhibit’s unveiling.

Tim Chaffey, who serves as content manager explained the reasoning behind the exhibit in a blog posted to the Answers in Genesis website.

“Our rebellious ancestors started building their city and tower in defiance of God’s command to fill the world and to glorify themselves (‘make a name for ourselves’),” Chaffey explained. “The structure we plan to build will be for the purpose of glorifying God by teaching the authority and authenticity of his Word and by sharing the gospel of Jesus Christ.”

Ancient Tower of Babel:
Temple of the Moon-god Cult

The biblical story of the Tower of Babel is a real historical event that took place after the worldwide Flood, at a time when the earth’s population still lived together in one place (2500-2200 BC). The important question is, therefore, what were they worshipping at the Tower of Babel?

It is widely believed that Shinar, where the Bible says the Babel event took place, was a territory in southern Mesopotamia (southern Iraq); and that Babel was likely located at the ancient city of Ur of the Chaldees where God called Abraham around 2000 BC.

In our recent class, Mystery Babylon,  we showed that the history, geography, and archaeological evidence around Ur, from the time-period of the Tower of Babel, indicates it was the chief Moon-god Temple of the day. The evidence is overwhelming. Ur means, “city of the moon god” and worship of the moon-god dominated the region.

What we learn from this, is that, from just after the flood, all the way until the Second Coming of Jesus, after the Tribulation, Satan’s chosen deception has been the Moon-god Cult symbolized by the image of the crescent moon like the giant gold one that sits on top of Mecca today!

In Old Testament times, Nabonidus (555-539 BC), the last king of Babylon, built Tayma, Arabia as a center of Moon-god worship with the crescent moon for its image. Arabia’s prominent religion (Ur, Babylon, Haran, Damascus, the Phoenicians, Canaan, Jericho, etc.) since the days of the  Tower of Babel was the Moon-god Cult in variations.

Scholars have pointed out that the Moon-god’s name “Sin“ is a part of such Arabic words as Sinai, the “wilderness of Sin,“ etc. Sin was the moon-god of Arabia.

When the popularity of the Moon-god waned in other parts of the world and pagan worshipers migrated to other false gods, the Arabs of the Arabian Peninsula always remained true to their conviction that the Moon-god was the greatest of all gods.

While they worshipped many gods at the pre-Islamic Kaaba in Mecca, the Moon-god was the chief deity. Ancient Mecca was in fact built as a shrine for the Moon-god.