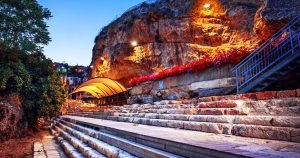 Preparing The Pool of Siloam

The biblical Pool of Siloam in Jerusalem will begin being excavated in 2023 says the Israel Antiquities Authority.

The last few years have brought a stunning series of new developments pointing toward preparation for Israel’s Temple.

A quick trip to our archives shows you just how much fascinating Bible truth has been bubbling up to the surface over the past few years, making it feel like God is perhaps sending us a message the hour is getting close.

Last year we saw the exciting arrival of 5 red heifers from Texas to Israel. The red heifer is a rare breed and required for cleansing the Temple sacrifices. The Jewish Sanhedrin is keeping a close watch on the heifers to insure they remain 100% pure red.

We also saw Israel’s announcement of plans to build a high speed rail line designed to take large numbers of visitors arriving at Israel’s Airport directly to the Temple Mount… and carry their sacrifices!

In another development, Israel’s newly elected religious-right government is pushing for more control of the Temple Mount and more rights for Jewish access to enter and pray on the Temple Mount which they currently are not allowed to do.

And now we get the announcement from the Israel Antiquities Authority of the coming expansion and reopening of the Pool of Siloam which is exactly what you’d expect to see if they were getting ready to rebuild the Temple in Jerusalem, and they are!
The Pool of Siloam, located in the southern portion of the City of David, the ancient epicenter of Jerusalem, and just outside the Old City walls is expected to become one of the most important historic and tourist sites in the city.

We are looking at some amazing developments happening in Israel right now that show us just how close we are to seeing a rebuilt Temple going up in Jerusalem. The pool of Siloam was the place where pilgrims, journeying to the second Temple in the first century, stopped to wash before ‘going up’ to worship the LORD in Jerusalem. The fact that they are getting ready to reopen the pool of Siloam once again to pilgrims can only mean one thing, that a Temple is coming, and guess what? It sure is!

The pool has been a focal point for archaeologists and scholars for the last 150 years. They are getting ready to reopen it to the public, and it has a direct purpose for worship in connection to the coming Third Temple.

The Pool of Siloam, the place where Jesus restored sight to the blind man, has profound significance for us in the closing moments of the Church Age. Jesus, who is the ‘light of the world’, allowed a blind man to see again at the pool of Siloam.

One thing we can count on seeing is more prophecy signs coming fast and furious! And hopefully we will see the greatest sign of all, the coming of the Lord for His Bride when He meets us in the air!

10 Therefore they said to him, “How were your eyes opened?”

11 He answered and said, “A man called Jesus made clay and anointed my eyes and said to me, ‘Go to the pool of Siloam and wash.’ So I went and washed, and I received sight.”
John 9:9-10 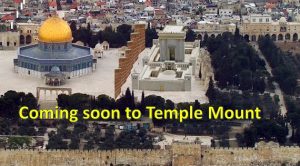 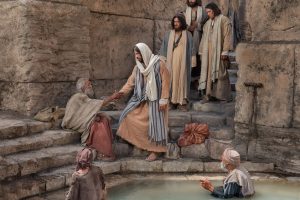