The Prophet Daniel’s Influence On The Christmas Story! 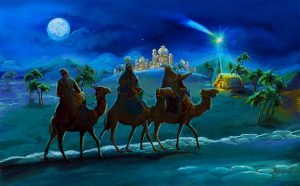 The Prophet Daniel’s Influence On The Christmas Story

“The heavens declare the glory of God.”
Psalms 19:1

Why is this important?

As Christmas approaches, we see images and hear stories of the “Wise Men,” (or, as they are often called, Magi), traveling from the East, following a star in order to pay homage to the Christ-child, the newborn king (Matthew 2:1-12). Many scholars believe that these Magi came from Babylon where Daniel ministered for over 70 years.

How did Babylonians of the first century know about Jewish prophecy, and what led them to believe that this particular star was the one that would lead them to the great “newborn king” and the prophesied Messiah?

Is it possible that the teachings and stargazing knowledge 600 years before Jesus, taught and prophesied by Daniel, is what helped the wise men know when and for what star they should look for concerning Christ’s first coming?

God who has all knowledge and lives in the “eternal present,” most certainly revealed the sign of the star to Daniel. He also revealed the exact time of Messiah’s first coming to Daniel found in Daniel 9:24-27 and commonly referred to as Daniel’s 70 weeks prophecy.

As chief of the Magi, Daniel’s teaching and prophecies became known throughout the ancient Near East. Even the Romans
were aware of his prophecies of a coming king of Israel (Matthew 2:3).

The wise men had been patiently waiting for this special star for a long time. They had to travel 1000 miles each way, a journey of about 4 months each way. Oh, but can you imagine what a thrilling journey it must have been as they followed the star in search of Messiah!

After the wise men found baby Jesus and worshipped Him, they were warned of God in a dream that they should not report back to Herod but were told to depart back to their country another way (Matthew 2:12).

Just as amazing is that all throughout the Book of Daniel, the prophet predicts 100’s of things that are still yet to come in the last days which predictions are verified in the Book of Revelation.

Those who believe the prophecies in the Old Testament were literally fulfilled in Jesus’ first coming can have hope and confidence that the future prophesies will also come to pass and be literally fulfilled as well. That’s the God we serve who knows the end from the beginning and tells us ahead of time in order that we might believe!

Daniel’s unique influence on the Christmas story is simply that the Magi followed the star based on their study of the prophet’s writings.

Does What You Do Impact the World?

Think about this… dare to be a Daniel!

The life Daniel lived and the work he did for the Lord helped the Magi centuries after his death to connect the dots between a light in the night sky and the “Light of the World.”

Now, you may say, “I am no Daniel,” but you have no idea how God may use the work he has called you to do nor the impact it might have a year from now, ten years from now, or even much further into the future.

We need to rest in the knowledge that:
…we are God’s handiwork, created in Christ Jesus to do good works, which God prepared in advance for us to do (Eph. 2:10).

The work that you do for the Lord, even the most mundane thing is work not wasted if it’s done for God’s glory.