The Four Horsemen of the Apocalypse Part 1 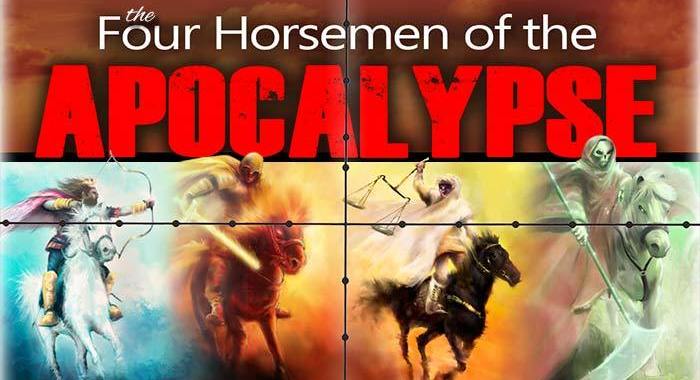 The topic of our upcoming class is the Rapture and the Four Horsemen of the Apocalypse. To help you be prepared for the class, you may want to read Revelation chapters 4-6.

I love those 3 chapters because they cover the rapture of the church, before the Tribulation begins and the scene around God’s Throne immediately following the rapture. I love seeing the Lamb who was slain take the seven-sealed scroll and break loose the four Horsemen.

Over the next two weeks, I’d like to give a brief overview of the four horsemen and their meaning in Revelation 6. We’ll cover the first two Horses this week and the final two horses next week. 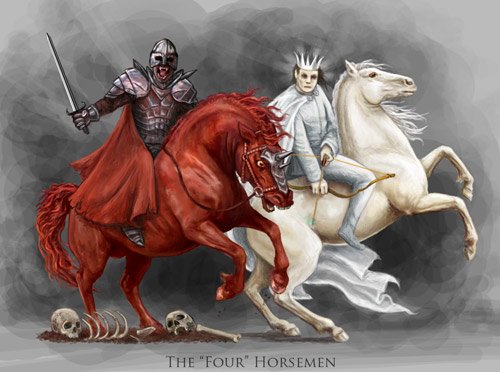 There are many movies and shows that deal with apocalyptic circumstances, and many of us have heard reference to the four horsemen. But where does the idea come from? Are they real people? What do they do?

In Revelation 6 Jesus opens seven seals of judgment to begin the Tribulation period on earth. The first four seals he opens are the four horsemen, and each one carries the wrath of God which is released from heaven to usher judgments on the earth.

While some apocalyptic judgments are specific events, these four last throughout the first half of the Tribulation and beyond. Here’s a look at the first two horsemen and their symbolic meaning:

The rider on the white horse is Antichrist.  He will rise just prior to the Tribulation by taking control of the 10 King Empire and making a peace treaty with Israel. He will be a deeply religious leader that operates on behalf of his false god Allah (Dan. 11:39).

His power and authority will come from the dragon (Satan), and like Satan he is a great deceiver. The symbol of him on a white horse aptly illustrates his deceptive nature for Jesus also returns to earth on a white horse (Rev. 19:11-14).

Satan’s purpose has always been to counterfeit the work of Christ. By the second half of the Tribulation, Antichrist will break his peace treaty and wage open war against Israel.

“Another horse, fiery red, went out. And it was granted to the one who sat on it to take peace from the earth, and that people should kill one another; and there was given to him a great sword.” (Rev. 6:3-4)

The next horse is the red horse. The blood-red appearance speaks of the holocaust of war and bloodshed. God will grant this horse the power to create war. Think about that for a moment!  We are told the red horse takes peace from the earth and that he wields a great sword! What do you think that BIG SWORD means?

Here’s how I view that big sword. Most likely, the “great sword” is God’s way of warning us that the coming 10-King Caliphate may possess nuclear weapons and won’t be afraid to use them!

Nations rise against nations during the Tribulation because they’re stirred up by the spirit of the Red Horse sent out from the Throne of God.

We know the red horse spirit of war lasts through the entire Tribulation because Jesus said if he didn’t return after seven years, no one would be alive.

This will be seven years like no other in history filled with murder, assassination, bloodshed, revolution, and war.