The Campaign to Destroy America

2020 is the perfect storm that I believe is being engineered by Satan for the purpose of weakening America to break its support of Israel before the start of the Tribulation. I’ll discuss much more about why I say that in our upcoming class on July 14. If you love America, and haven’t yet registered for the class, please do so soon. The movement for Impeachment gave way to COVID and the destruction of our economy which birthed the radical BLM riots to widen the division in our country and to fuel hatred for law enforcement and a new movement is now rising that seeks to obliterate America’s history. Why now? The storm against America happened in just the first 6 months of an election year for the one who gets to control the world’s last remaining super-power! The war on America is real and of great, prophetic significance, and we’re caught in the middle of it. 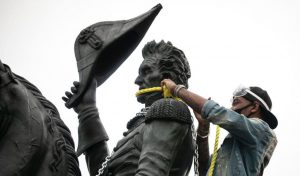 A Protester attempts to pull down the statue of Andrew Jackson in Lafayette Square near the White House June 22, 2020 in Washington, DC.

Nation-wide protests weeks after George Floyd’s murder turned into a movement to destroy our nation. We’ve seen this coming for a while.

Parading as an attack on racial injustice, the movement quickly turned into obliteration of history. This week that devastation set its eyes on the Christian faith. Less than one week ago, protesters rekindled the call for removing confederate statues. From there, the momentum quickly shifted to anyone whose statue is seen as offensive, who may (or may not) have owned slaves or supported slavery at any time. Never mind that the qualifiers of what constitutes “offensive” is blurred; the momentum of eradicating history is ruled by hatred and emotion, not reason.

Just in the last week, the long list of what’s offensive includes Ulysses S. Grant, Andrew Jackson, Winston Churchill, Abraham Lincoln, Theodore Roosevelt, Francis Scott Key and George Washington. Rioters in Portland draped a US flag over a George Washington statue and set it on fire before toppling the statue. Because they’re now eyeing the Washington Monument and Jefferson Memorial, hundreds of troops from the DC National Guard have been mobilized to protect monuments in the capital.

As leftist demonstrators take aim at statues and monuments that honor former American presidents, South Dakota Gov. Kristi Noem has announced that Mount Rushmore will be protected! Imagine that! She ought to get a medal of honor!

It was inevitable. When you go from a culture that is willing to cancel someone for what they said 10 years ago, why not go for what was said 200 years ago? Everything is subject to the squinted-eye hatred of extremists. Now they’re coming against the written Word and the Living Word saying things like, “All murals and stained glass windows of white Jesus, and his European mother, and their white friends should also come down – They are a gross form of white supremacy created as tools of oppression and racist propaganda. They should all come down.” — Shaun King (@shaunking) June 22, 2020

In addition, the Jewish community has been increasingly under attack as protesters also toppled a memorial to Holocaust survivors in a cemetery in California. COVID-19 measures issued by governors banned Christians from congregating in churches. Just weeks later, those same governors had no issue with city-wide protests that brought thousands together. We’re now at the intersection of faith and history with the desire for one side to eradicate the past and the desire for Christians to uphold the Constitution and abide by the Judeo-Christian principles that God has graciously given us.

Believers… all of us… need to cry out to the Lord in earnest that He would heal our land and rescue our country from anarchy that God’s name will be glorified for our children and grandchildren until Jesus returns! If it feels like there is no stability in this movement and the monstrosity it has become, it’s because there isn’t any stability. If it feels like the goal posts keep shifting, it’s because they have. This is how Satan operates as the master of chaos and confusion using the movement of the mob that hates the Bible and righteousness and biblical Christianity. The riots and emotions need to be under control ASAP because a broader sinister movement is hijacking the protests. When they get full control, they WILL burn it ALL, even good intentions. — Shireen Qudosi (@ShireenQudosi) June 3, 2020 Whether they come for statues today or believers tomorrow, the goal of the movement is to Takedown America and to eradicate our Christian roots and rewrite the narrative by obliterating any other narrative. The goal isn’t just to level racial injustice; it’s to level America 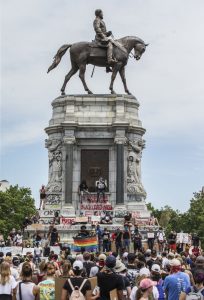 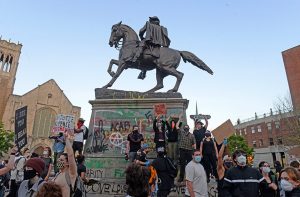 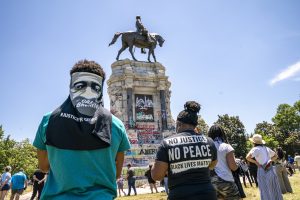 People gather at the Robert E. Lee Monument, now covered by protest graffiti, in Richmond, Va., Sunday, June 7, 2020, following a week of unrest in the U.S. against police brutality and racism in policing. The statue of the Confederate Civil War general is slated for removal at the order of Gov. Ralph Northam. (AP Photo/J. Scott Applewhite) 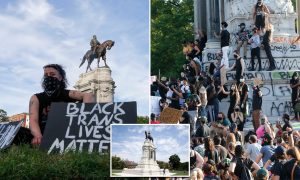