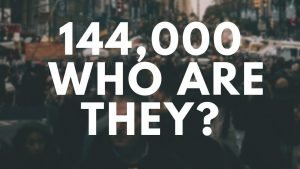 Our upcoming study on April 26 maybe one of the most encouraging topics in the entire book of Revelation! That’s quite a statement but I believe it’s true.

Like much of Revelation, mystery surrounds the 144,000 Tribulation witnesses. Who are they? What will be their objective? Will they be protected? Will they have an effect on the lost people of the Last Days?

In chapter 7 and chapter 14 of Revelation, God reveals His plan to seal 144,000 Jewish evangelists. They could be called Israel’s Tribulation Forces but I like to call them: “The Saviors’ Special Forces.”

Being sealed by God protects these amazing servants from death so God is able to send them into the heat of the Tribulation to go up against Satan and Antichrist at the very height of their power.

As Satan’s forces get busy marking the devil’s followers with the Mark of the Beast, “The Saviors’ Special Forces” get busy evangelizing souls. What develops out of this great CLASH is probably the greatest revival of all time. It’s described in Rev. 7.

After these things I looked, and behold, a great multitude which no one could number, of all nations, tribes, peoples, and tongues, standing before the throne and before the Lamb, clothed with white robes, with palm branches in their hands.

But this is not the end of story. It gets ever better… much better!

The reason Satan hates the Jewish people and the nation of Israel is because he knows that the chosen people are God’s promised nation who are prophesied to one day rule the world with Jesus as their King. Satan is jealous of God’s love for Israel and will do anything to prevent that from happening. In fact, he’s been trying to wipe out the Jewish people ever since Pharaoh tried to kill them at the Red Sea.

The devil’s plan is to overwhelm and kill all the Jews in the Tribulation by using his 10-nation, nuclear powered Caliphate and then rule the world himself, from Jerusalem, in their place!

But without warning, God slams the door shut on his demonic dream to overturn the Abrahamic Covenant and rule the world. He does so by plucking out and sealing 12,000 righteous men, from each of the 12 tribes of Israel who can never die yet remain in their normal human bodies. The importance of this action cannot be overstated.

By supernaturally sealing these men, God insures that Israel will survive forever! In this one momentous act, God assures the fulfillment of the Abrahamic Covenant and guarantees that the nation of Israel will not be annihilated in the Tribulation. As prophesied, the chosen nation will one day rule and rein with Jesus in the coming Millennial Kingdom.

This prompts one of the great scenes in the book of Revelation. When the Cloud-Rider returns to earth at the end of the Tribulation to set up His Kingdom, the scene finds Jesus on Mount Zion, standing shoulder to shoulder and embracing His Special Forces.

Then I looked, and behold, a Lamb standing on Mount Zion, and with Him one hundred and forty-four thousand, having His name and the Father’s name written on their foreheads.

As believers, it’s clear we are in an epic battle for our faith, our families and our nation! How do we live in this world by loving others and yet hating the darkness?