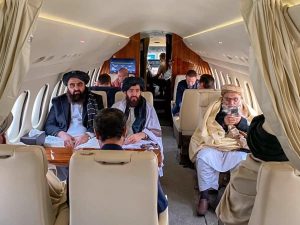 Off To Norway To Talk About Women’s Rights?

Please continue to pray for the underground church in Afghanistan.

The Taliban travelled to Norway in a private jet and are trying to maneuver their way into legitimacy and recognition by coaxing foolish Western governments like Norway to give them financial support. They claim that their topic of interest is woman’s rights!  You’re kidding!

The West is so naïve and blind. Instead of befriending radicals, the West should befriend the suffering people in Afghanistan and help remove the radicals. If they would be honest the Taliban would admit that they really have no concerns for woman since Sharia says it takes 4 woman to equal the word of one man!

The Taliban’s real goal is the creation of the Caliphate and to spread their radical Islamist ideology worldwide and the West won’t change that by meeting with them in private to talk about women’s rights!