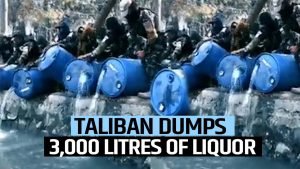 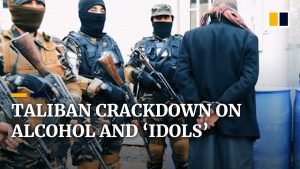 The Taliban, which took over Afghanistan in just a matter of days after Joe Biden abruptly pulled American military forces out, leaving behind both Americans and billions of dollars in war machinery, now have raised the level of enforcement of Shariah and punitive Islamic religious law.

The Taliban stunned the rest of the world with its quick takeover of Afghanistan as soon as Biden’s pullout was implemented.

Since the 90’s, the Taliban has consistently called for an Islamic Caliphate and telling the world that they felt it was their duty to make the Caliphate a reality including the rule of Shariah law. The Quran calls “intoxicants” “defilement from the work of Satan.”

But remember, you’re not supposed to talk about stuff like this anymore in America!

In fact, it’s getting dangerous in America to criticize Islam on any level. If you even hint that some aspects of Shariah may be incompatible with Western society and law, you’re labeled a racist and a bigoted ‘Islamophobe’.

Protection of Islam from criticism comes about because Satan, the god of this world, favors Islam and needs to protect it like a mother protects her baby. Satan plans to use it by deceiving Muslims into becoming his primary weapon to destroy Israel and defeat Jesus at His Second Coming!

Since the Taliban has taken over Afghanistan, it has confirmed the resumption of executions for offenses to Islam, and it has banned foreign currencies and declared the region to be a caliphate, confiscated girls to use as sex slaves, assembled a “kill list” of LGBT Afghans, handed over land and money to jihadists who killed U.S. soldiers, withdrawn rights for women, and even banned barbers from trimming men’s beards. Welcome to Sharia-heaven!

Students of Bible prophecy need to understand that the Taliban isn’t any different than ISIS or Hamas or Boko Harem or Hezbollah or the former Ottoman Caliphate. They are all forerunners of the coming empire of Antichrist which will be driven by the final Caliphate using the same enforcement of Shariah on the unsuspecting world. I’m looking for Jesus to come soon… how about you?