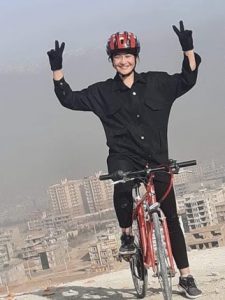 An Afghan volleyball player on the girls’ national team was beheaded by the Taliban — with gruesome photos of her severed head posted on social media, according to her coach.

Mahjabin Hakimi, one of the best players in the Kabul Municipality Volleyball Club, was slaughtered in the capital city of Kabul as Taliban thugs searched for female sports players, her coach told the Persian Independent.

She was killed earlier this month, but her death remained mostly hidden because her family had been threatened not to talk, claimed the coach, using a pseudonym, Suraya Afzali, due to safety fears.

Images of Hakimi’s severed neck were published on Afghan social media, according to the paper, which did not say how old she was. 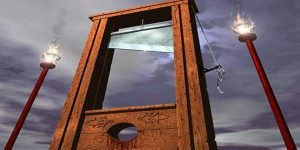 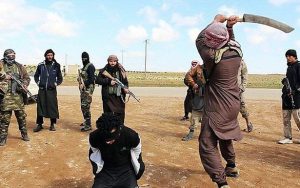 Revelation twenty tells us Christian martyrs in the last days will be beheaded.

I saw thrones on which were seated those who had been given authority to judge. And I saw the souls of those who had been beheaded because of their testimony for Jesus and because of the word of God. They had not worshiped the beast or his image and had not received his mark on their foreheads or their hands. They came to life and reigned with Christ a thousand years.
Revelation 20:4

The Bible shows us that in the last-days, beheading will be the primary method used by the beast (Caliphate) for capital punishment. Believers who refuse to submit to the teachings of Islam and who reject bowing to the Image of the Beast or taking the Mark of the Beast will be martyred.  They will be killed specifically for their “testimony of Jesus and because of the word of God.”

Is the Bible implying a resurrection of guillotines during the Tribulation period?  What exactly is the Bible inferring will occur that will result in the 8th empire’s standard of using beheading as a means of executing Christians?

God chose to drop the clue about beheading to help us identify the beast. Who are the beheaders? They certainly aren’t Baptist’s, Catholics or Protestants. Only Muslim countries practice capital punishment by beheading. Only the religion of Islam promotes killing Christians, Jews and everyone else who doesn’t submit to them. They are the only religion in the world that practices killing those who refuse to follow them. That’s one of the reasons God describes Islam as the “mother of harlots” and the “mother of abominations of the earth” (Rev. 17:5). There’s no other religion that is worse!

In Saudi Arabia, this practice is sanctioned to the point that some beheadings are public affairs. This is quite understandable as a demonstration of state power. After, all, the “Sword of Islam,” is the image emblazoned on the Saudi Arabian flag.

Beheading infidels is sanctioned in the Quran and put into law in Muslim majority nations under Sharia Law.

The Quran makes for harrowing reading. Here’s a sampling.

Allah promises to “cast terror into the hearts of those who are bent on denying the truth; strike, then, their necks!” (8.12). He instructs his Muslim followers to kill unbelievers, to capture them, and to ambush them (9.5). Everything contributes to advancing Allah’s goal: “Strike terror into Allah’s enemies, and your enemies” (8.60).
“When you meet the unbelievers, strike the necks” – Quran 47:4

Antichrist and the False Prophet won’t need guillotines to accomplish their murderous deeds. In fact, Muslim cultural sees honor in the sword. For centuries, Muslims have boasted about their bravery in the imagery of the sword.

Today, with the rise of Islamic groups like ISIS, the Taliban, Boko Harem, Al Qaeda and Shariah compliant countries, we are seeing more and more beheadings as another sign of the last days.

This is telling us we are getting closer to the Tribulation. It’s likely that Afghanistan is one of the 10-nations that make up the Beast Empire and here we see them beheading just as Revelation prophesied.