Signs of the Shepherds – Secrets Surrounding the Birth of Messiah

Details of the Trump Plan, released by a TV channel based in Lebanon, discuss a trilateral peace agreement between the Palestinian Authority, Hamas and Israel in which a “new Palestinian state” would be established in the West Bank and the Gaza Strip, excluding the West Bank Jewish settlement blocs which would remain part of Israel.

Jerusalem will remain united under mostly Israeli control with some responsibilities shared with a Palestinian state including the West Bank and Gaza, according to a draft copy of President Trump’s “Deal of the Century” peace plan for the Middle East published by the Lebanese Al-Mayadeen TV channel this week.

Stunning new details have been leaked, purposely of course, regarding the ‘Deal Of The Century’ that Donald Trump has tasked Jared Kushner with working out. The West Bank and the Gaza Strip would form the nucleus of the new Palestinian State, and this new state would share control of an undivided Jerusalem with Israel. Deal or no deal? That’s the question. And what is the answer to that question? Jerusalem. It has always been about Jerusalem.

“Then answered I them, and said unto them, The God of heaven, he will prosper us; therefore we his servants will arise and build: but ye have no portion, nor right, nor memorial, in Jerusalem.” Nehemiah 2:20

This plan is light years ahead of whatever has been presented up until the Trump presidency!

After reading the proposal below, even if it fails it is the most well thought out peace plan that once again will serve to accelerate end time events.

This plan, in essence, is laying the groundwork for the coming seven-year covenant between Israel and Antichrist that triggers the time clock for the 7-year Tribulation.

If it was any other nation than Israel, and any other city than Jerusalem, it would be a slam-dunk.

But my Bible tells me that Israel is not numbered among the nations and Jerusalem is not like any other city. It is the place where God has put His own name.

“Yea, every pot in Jerusalem and in Judah shall be holiness unto the LORD of hosts: and all they that sacrifice shall come and take of them, and seethe therein: and in that day there shall be no more the Canaanite in the house of the LORD of hosts.” Zechariah 14:21

An interesting twist in the fine print is that Saudi Arabia would control the Al-Aqsa mosque in Jerusalem instead of Jordan who is doing it now. Now we are starting to see why President Trump has spent time and energy wooing the Saudi kingdom. It’s all beginning to make sense.

Jerusalem To Remain United In ‘Deal of the Century’

FROM THE JERUSALEM POST: The draft details the timetable and methods of the plan. 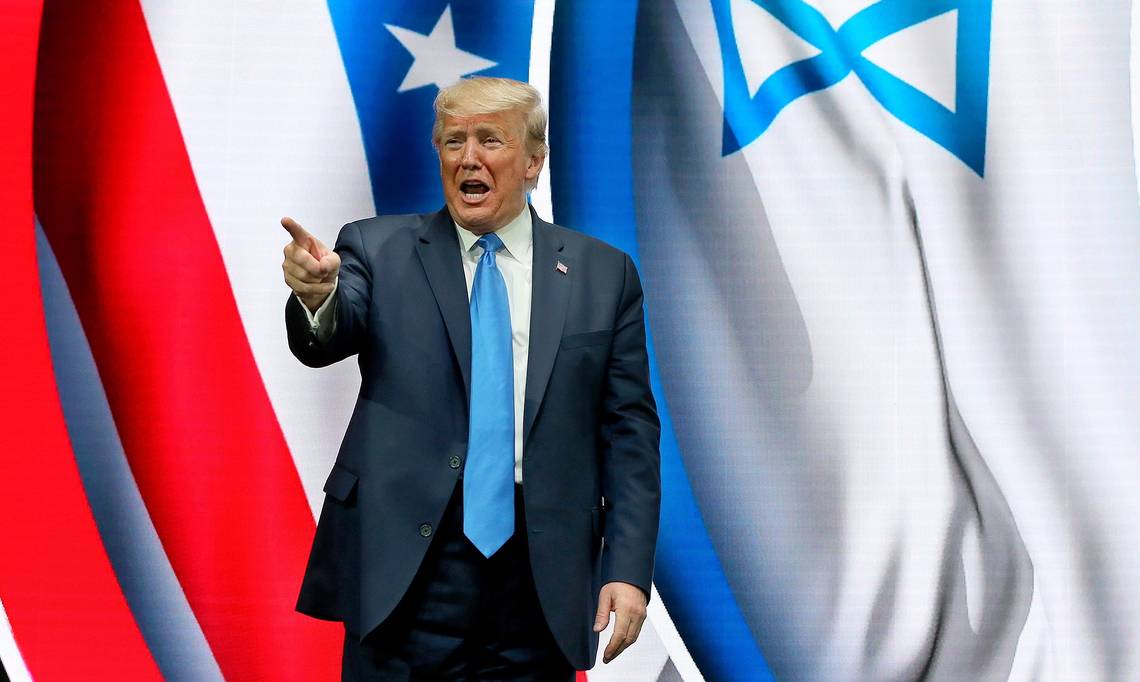 This new arrangement with Saudi Arabia is a major change to the status quo on the Temple Mount and if it happens, would align with the prophetic events of Revelation 17 where the Beast becomes enraged at Saudi Arabia aka Mystery Babylon, and destroys Saudi Arabia and the city of Mecca in one hour (Rev. 17:16-17; 18:17)!

JEWS WILL NOT BE ALLOWED TO PURCHASE ARAB HOMES AND ARABS WON’T BE ABLE TO PURCHASE JEWISH HOMES – AND NO ADDITIONAL AREAS WILL BE ANNEXED TO JERUSALEM. HOLY SITES IN THE CITY WILL REMAIN AS THEY ARE TODAY, ACCORDING TO THE REPORT.

In the Gaza Strip, Egypt would grant land to the new Palestinian state in order to build an airport and industrial facilities. Palestinians would not be able to live in the lands provided by Egypt. A highway and a pipeline for treated water would be built between Gaza and the West Bank, according to the reported draft.

The United States, the European Union and the Gulf states would help implement the agreement and sponsor it economically. “An amount of $30 billion will be allocated over a period of 5 years for projects related to the new Palestinian state,” reported the paper.

According to the draft, an agreement will be signed between Israel and the new Palestinian state, with Israel providing protection to the state from “external aggression,” while the Palestinians pay for it. The amount that the Palestinians will need to pay for this protection will be negotiated between the Arab nations and Israel. 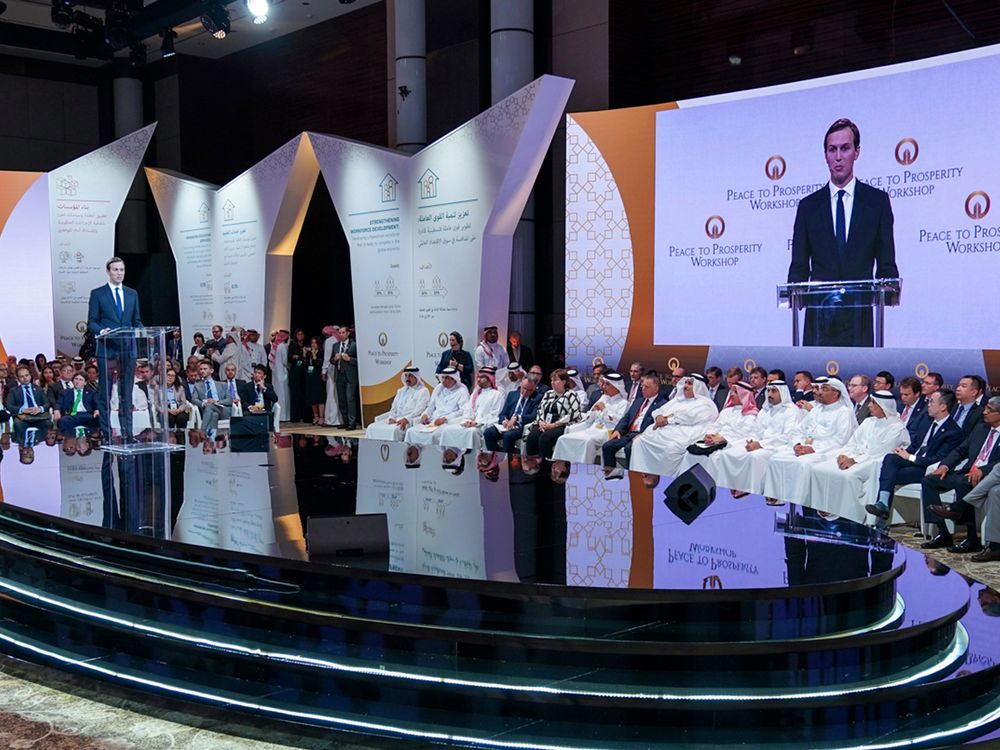 The Al-Mayadeen report detailed a timetable provided in the draft copy of the agreement.

Upon the signing of the agreement, Hamas will hand over its weapons and armaments to Egypt, and members of Hamas will receive monthly salaries from Arab nations. The borders of the Gaza Strip will be opened to international trade through the crossings with Israel and Egypt and by sea. Trade will also open between Gaza and the West Bank.

A year after the agreement is signed, democratic elections will be held for the Palestinian state, with all Palestinian citizens being able to run as candidates. Around that time, all prisoners would begin being released, to be completed over a period of three years.

Within five years, a seaport and airport will be established for the Palestinian state. Until that point, Palestinians will be able to use Israeli ports. The borders between the Palestinian state and Israel will be open to the passage of civilians and goods. A highway that rises 30 meters above the ground will connect Gaza to the West Bank. The highway would be built by a Chinese company.

The Jordan Valley would remain under Israeli control, according to the report. Highway 90 will be expanded and will link the Palestinian state with Jordan. The highway will be supervised by the Palestinians.

If the PLO accepts the agreement and Hamas or the Palestinian Islamic Jihad (PIJ) terrorist groups don’t accept, then the two organizations would bear the responsibility of their decision. In any military confrontation between Israel and Hamas, the US will support Israel in order to harm the leaders of Hamas and PIJ, as the US won’t accept a situation in which dozens of people control the fate of millions.

IF ISRAEL REJECTS THE DEAL, THE US WILL END ECONOMIC SUPPORT TO THE STATE OF ISRAEL, ACCORDING TO AL-MAYADEEN.

Although Palestinian Authority President Mahmoud Abbas has said that the US is biased, one of his chief advisers reportedly said they would not reject Trump’s plan outright.

A letter published in The Guardian by former EU officials, including six prime ministers and 25 foreign ministers, called for postponing the “Deal of the Century” because it is unfair to the Palestinians.

In the letter, which was sent to the European Union and EU governments, the former leaders argue that Europe must stand by the two-state solution and condemn the Trump administration’s policy, which they claim is unilaterally in favor of Israel.