SHOCK! Israel Announced They Will Tell The United Nations Today They Are Ready To Finally Agree To The Two-State Solution! 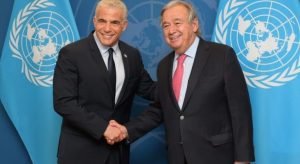 For the first time in history, an Israeli Prime Minister is expected to announce his support for the establishment of a Palestinian State during his speech to the UN General Assembly today, according to a source close to the Israeli premier.

Israel remains committed to the Two State Solution to resolve the Israeli-Palestinian conflict, Prime Minister Yair Lapid is expected to tell the United Nations General Assembly when he delivers his first ever address to that global body on Thursday morning.

It would mark the first time an Israeli prime minister has declared support for a two state solution at the UN.

“For, behold, in those days, and in that time, when I bring again the captivity of Judah and Jerusalem, I will also gather all nations, and will bring them down into the valley of Jehoshaphat, and will plead with them there for my people and for my heritage Israel, whom they have scattered among the nations, and parted my land.”
Joel 3:1-2
During his address to the UNGA on Wednesday, President Joe Biden also endorsed the two state solution, saying that the Palestinians were “entitled” to their own state, and that it is the only way to ensure Israel’s security going forward.

“We will continue to advocate for a lasting, negotiated peace between the Jewish and democratic state of Israel and the Palestinian people,” Biden told the UN General Assembly.

“The United States is committed to Israel’s security. And a negotiated two state solution remains our best way to ensure Israel’s security and prosperity for the future and give the Palestinians the state to which they are entitled,” he said.

Palestinian Authority President Mahmoud Abbas is also slated to address the GA on Thursday, and is expected to call for a Palestinian State and to call on the UN to grant the Palestinians full-member status at the global body.

From a Bible prophecy perspective, these announcements could spark a shift with serious implications for the Middle East peace with three principle parties (Israel, US, Palestinians) agreeing its time to divide Israel into two states. 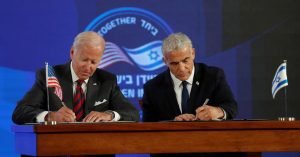 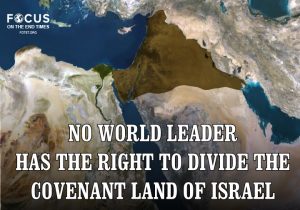