Movement of Hate Nominated For What? 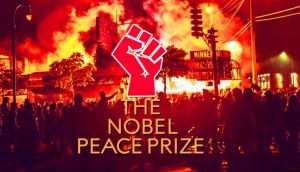 BLM activists harassed diners seated on the patio of a Mexican restaurant and allegedly demanded they raise their fists. Other activists from the movement also surrounded Sen. Rand Paul (R-KY) and several women for several minutes on the streets of Washington, DC, as they attempted to leave a Republican National Convention event at the White House.

Last September, released data from Princeton University showed that riots associated with the Black Lives Matter movement took place in 48 out of the 50 largest cities in the United States.

The very idea of a group like Black Lives Matter whose methods are so violent and anarchist being nominated for a Nobel Peace Prize should be a wake up call to every believer as to where we are today at the end of the church-age. And it should be repugnant to every human with a brain or a conscience.

The riots BLM caused for 6 months last year resulted in a dozen dead and over $2 billion in arson and damages, making it the most costly riots in the history of America. Now someone wants to give these domestic terrorists a peace prize??

I have always stood with the plight of black people here in America, and have done my best my entire life to stand against racism in all its many forms. I find the idea of ‘white supremacy’ to be abhorrent, just as I find the idea of black supremacy to be equally disgusting. Mob rule, for whatever the reason, is always an ugly thing and it always begets violence. Once you sanction violence as a means to an end, you have lost the battle.

The Black Lives Matter Movement, a Communist organization founded on Marxism, is a disgusting proposition, and is antithetical to freedom and to a free people. I stand against racism and always will, and I’ve stood against the deception and gestapo tactics of Black Lives Matter from the first day they showed up. 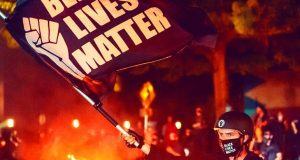 FROM BREITBART NEWS: The nomination was made by Petter Eide, a member of Norway’s parliament who considered the effort to be “a very important worldwide movement to fight racial injustice,” and brushed off questions regarding violent protests in the movement’s name. “Studies have shown that most of the demonstrations organized by Black Lives Matter have been peaceful,” Eide said. “Of course there have been incidents, but most of them have been caused by the activities of either the police or counter-protestors.”

Yikes, this guy Eide has surely drunk the Kool-aid and is repeating the lie and narrative that evil is good and good is evil. Welcome to the end times!

Last September, demonic BLM rioters accosted and threatened a woman screaming, “Are You A Christian.” And in Charlotte, NC you may remember I reported the disturbing story of BLM chanting in the streets “F… Your Jesus!”

We should not forget the bigger picture here that Satan is using BLM as a tool to widen the division in America and that, in the providence of God, our unhinged disunity is another plank in the weakening of America toward its ultimate downfall in the last days.

Since this dangerous movement, backed by Satan, held destructive riots in 48 out of the 50 largest cities in the United States, let’s not forget the real facts when some liberal kook from Norway makes such a bazaar nomination.

The Norway-based Nobel Committee is expected to choose the winners of the award in November. READ MORE 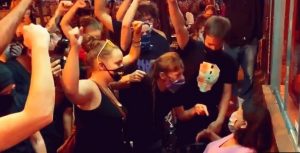 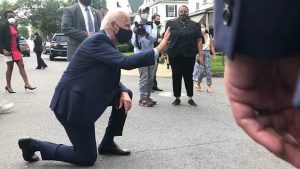 Everywhere he went while campaigning last year we found Joe Biden bowing down in the streets in a disgusting show of favor and acceptance of the lawlessness and extremism of BLM. We have a president in the Whitehouse who favors anarchism!