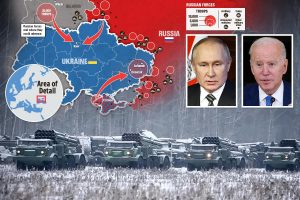 Could ignite biggest land war in Europe since WWII

Most major wars in the last 75 years or so have taken place in the Middle East, Asia and Africa. But today, rumors of imminent war are rife in Europe.

U.S. intelligence says Russia is now fully ready to invade Ukraine – and could strike as early as Wednesday. Europe thus suddenly finds itself on the verge of the biggest land war since World War II.

One intelligence estimate indicates upwards of 50,000 deaths could result.
Hundreds of thousands of refugees could also be created from such a war.

“The U.S. intelligence briefing included specific reference to next Wednesday, Feb. 16, as a start date for the ground invasion,” three officials – based in Washington, London and Ukraine – told Politico.

ISRAEL, U.S., OTHERS URGE ALL CITIZENS TO LEAVE UKRAINE IMMEDIATELY

Israeli Prime Minister Naftali Bennett said on Saturday night that all Israelis should immediately leave Ukraine. An estimated 15,000 Israelis live or work there.  Israeli officials say plans are being prepared to create an airlift to evacuate Israelis if necessary.  Currently, 22 civilian flights a week travel between the two countries.

The U.S. is also urging all Americans to leave Ukraine immediately. The U.S. is evacuating most of its embassy staff in the capital of Kiev. 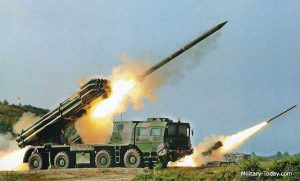 Russia has moved long-range artillery and rocket launchers into position, threatening Ukraine, according to U.S. official.

“On February 12, 2022, the Department of State ordered the departure of most U.S. direct hire employees from Embassy Kiev due to the continued threat of Russian military action,” read a statement.

“U.S. citizens should not travel to Ukraine, and those in Ukraine should depart immediately using commercial or other privately available transportation options.”

Germany, Netherlands, Spain and Belgium are doing the same. Others are expected to follow.

BIDEN SPEAKS TO PUTIN, EVEN AS HE BOLSTERS U.S. FORCES NEAR RUSSIAN BORDER

“President Joseph R. Biden, Jr. spoke today with President Vladimir Putin of Russia about Russia’s escalating military buildup on the borders of Ukraine. President Biden was clear that, if Russia undertakes a further invasion of Ukraine, the United States together with our Allies and partners will respond decisively and impose swift and severe costs on Russia. President Biden reiterated that a further Russian invasion of Ukraine would produce widespread human suffering and diminish Russia’s standing. President Biden was clear with President Putin that while the United States remains prepared to engage in diplomacy, in full coordination with our Allies and partners, we are equally prepared for other scenarios.”

On Friday, “the president held a secure video conference with key allies and partners to coordinate our approach to this crisis,” said National Security Advisor Jake Sullivan. “The participants were the UK, France, Germany, Italy, Canada, Poland, Romania, the Secretary General of NATO, and the presidents of the European Union.”

Currently, the U.S. is increasing its military presence in NATO countries such as Poland and the three Baltic states — Estonia, Latvia and Lithuania — to deter any temptation Putin might have to expand or redirect his invasion.

“NATO has been moving swiftly in recent weeks to increase its force presence along the eastern flank, and on Friday, U.S. Defense Secretary Lloyd Austin ordered an additional 3,000 troops from the 82nd Airborne Infantry Brigade Combat Team to Poland,” reported Politico. That will bring the total number of U.S. troops sent to Poland and Germany to 5,000.”

“Additionally, 1,000 soldiers based in Germany were sent to Romania last week,” Politico noted. “The U.S. also sent four U.K.-based F-15 fighters to Poland. The U.K. has said it is sending additional troops to Poland and France is sending soldiers to Romania as part of NATO’s beefed-up response to the huge Russian military mobilization.”

PUTIN DENIES ANY INTENTION TO INVADE

In a 90-minute call with French President Emmanuel Macron, Putin denied any intention of seizing Ukraine.
“We are not saying that a decision has been taken — a final decision has been taken by President Putin,” Sullivan said. “What we are saying is that we have a sufficient level of concern based on what we are seeing on the ground and what our intelligence analysts have picked up.” 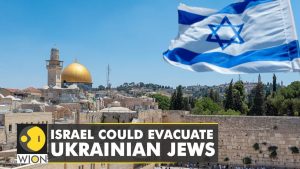 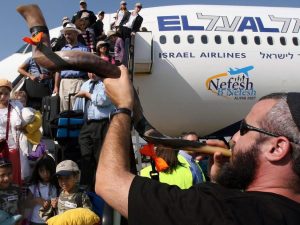 Israel has Plan to Rescue Ukrainian Jews in event of Russian invasion!

The Minister of Aliya in Israel preparing to rescue and bring approximately 200,000 potential Jews from Ukraine, in case of a Russian attack on Ukraine.

As the threat of a Russian invasion is becoming imminent, Israel is preparing for an evacuation of up to 200,000 Israeli citizens residing in Ukraine and members of Ukraine’s Jewish community.

There is a planned rescue operation to bring them to Israel, and to provide temporary housing. Though details of this evacuation plan are confidential, we are vigilantly following these events. With military escalation, Israel says they will do whatever is in their power to support efforts to save as many people as possible. At the moment, volunteers are in training, and waiting instructions.