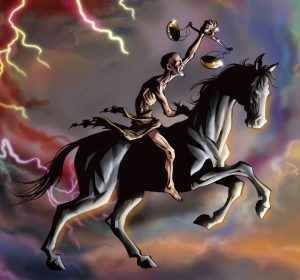 I looked, and behold, a black horse, and he who sat on it had a pair of scales in his hand. And I heard a voice in the midst of the four living creatures saying, “A quart of wheat for a denarius, and three quarts of barley for a denarius; and do not harm the oil and the wine.” 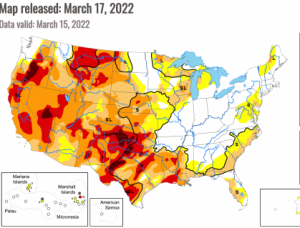 The Prophetic Impact of Russia’s War with Ukraine

The headline on the above weather map that was just released read, “Severe Drought and Dust Bowl Conditions Threaten to Create a Disastrous Winter Wheat Harvest in the U.S.” When I saw the headline I thought to myself, “this is exactly what we don’t need right now.” But I caught myself and my next thought was that God doesn’t always give the world what it needs because sometimes a season comes when God gives the world not what they need but what they deserve!

Food prices in the U.S. have already been soaring, and now we are on track for an absolutely horrible winter wheat harvest in the heart of the American bread basket. Due to extreme drought, winter wheat is in very bad shape in states such as Kansas, Oklahoma and Texas.

Of course this comes at a time when the war in Ukraine is going to greatly reduce wheat exports from Russia and Ukraine. Over the last 12 months, the price of wheat has already risen 69 percent, and now the crisis threatens to go to an entirely new level.

By the end of 2022, we are going to witness serious shortages of food in many parts of the globe. In fact, World Bank President David Malpass is openly admitting that we are now facing “a huge supply shock” as a result of the war in Ukraine.

We were already moving into a global food crisis even before the war erupted.  According to the UN, worldwide food prices in February 2022 were 20.7 percent higher than they were in February 2021, fertilizer prices have gone absolutely nuts, crop production is down all over the planet due to crazy weather patterns, and supply chain problems caused by the pandemic continue to create ongoing headaches.  But now that the war has erupted, it is going to push this rapidly growing global food crisis to a level that none of us have ever seen before.

Under normal conditions, Ukraine exports tremendous amounts of food and is considered to be one of the most important “breadbaskets” on the planet.

Unfortunately, everything has changed now, and this has pushed the global price of wheat up 55 percent since a week before the invasion happened…

Ukrainian farmers have been forced to neglect their fields as millions flee, fight or try to stay alive. Ports are shut down that send wheat and other food staples worldwide to be made into bread, noodles and animal feed. And there are worries Russia, another agricultural powerhouse, could have its grain exports upended by Western sanctions.

While there have not yet been global disruptions to wheat supplies, prices have surged 55% since a week before the invasion amid concerns about what could happen next. If the war is prolonged, countries that rely on affordable wheat exports from Ukraine could face shortages starting in July, International Grains Council director Arnaud Petit told The Associated Press.

Right now, the global price of food is the highest that it has ever been, and Russia and Ukraine normally account for “nearly a third of the world’s wheat and barley exports”.

Now that exports from Russia will be greatly reduced and exports from Ukraine will be virtually non-existent, some countries will almost immediately be facing extreme stress.

For example, just consider Lebanon.  The Lebanese normally get 60 percent of their wheat from Ukraine…

War-ravaged Syria recently announced it would cut spending and ration staples. In nearby Lebanon, where a massive explosion at the Beirut port in 2020 destroyed the country’s main grain silos, authorities are scrambling to make up for a predicted wheat shortage, with Ukraine providing 60% of its supply. They are in talks with the U.S., India and Canada to find other sources for a country already in financial meltdown.

Things are going to be very challenging in Europe as well…

Ukraine supplies Europe with 60% of its corn and nearly half of a key component in the grains needed to feed livestock.

Meanwhile, crops all over the world are in surprisingly poor shape because weather conditions have been so strange.

Israel wants to help Egypt find alternative sources of wheat. The majority of the country’s wheat is imported from Ukraine. Rising wheat prices stemming from Russia’s invasion are taking a toll on the Egyptian economy.

It’s is being projected that China’s wheat crop could also be disrupted.

The condition of China’s winter wheat crop could be the “worst in history”, the agriculture minister said on Saturday, raising concerns about grain supplies in the world’s biggest wheat consumer.

A limited supply of soft white wheat, the primary type of wheat grown in the Inland Northwest, has helped lead to a six-year low for wheat exports from the United States. That’s according to the USDA wheat report for February.

Another factor that can drive up the cost of food is soaring energy prices.

The national average of a gallon of gasoline in the United States has crossed the four dollar threshold.

For example, at one gas station in Los Angeles consumers are now paying about seven dollars a gallon to fill up their vehicles.

What would skyrocketing gas prices do to our economy?

This war is going to end up deeply affecting every man, woman and child on the planet.

Normal is not returning… Jesus is!

After Jesus raptures His church… He releases the Black Horse spirit of famine who rides forth bringing his shortage of wheat!

How could all these anticipated wheat and food shortages be happening simultaneously across the globe and also occurring in sink with the war on the “bread baskets” of Ukraine and Russia?

God’s Sovereignty is moving earth closer to the edge of the Tribulation. Grocery store food shelves began emptying during COVID. After two years of the plandemic, now this horrible war comes behind and is shaking earth to an even greater degree! What’s coming next is anyone’s guess but I suggest the church would be wise to start looking up!

It seems like the future food shortages are arriving sooner than anticipated and may possibly be God’s preplanned precursors to the Black Horse of famine in Revelation 6. Talk about a wheat shortage! The famine becomes so severe near the start of the Tribulation that those left behind will need to work a whole day just to be able to afford enough wheat to sustain them for another day! Death released by the pale horse follows closely behind the black horse of famine!

Did you notice that Revelation 6:6 specifically mentions a wheat shortage in the last days?

Based on the untimely war in Ukraine, we can now begin to envision a scenario where any one of the dramatic changes brought on by the war could become the lead domino to a much more unstable world.

A domino effect or chain reaction is the cumulative effect produced when one event sets off a chain of connected events.

I’ve always envisioned the end times would unfold rapidly like a row of dominoes. It takes just one domino falling to unleash a major chain-reaction. We are living in the rising tide of darkness before the rapture of the church and the ongoing conflict between Ukraine and Russia is like someone taking their finger and starting to apply pressure on the first domino.

The question is, will this Ukraine conflict and the moves countries are making in reaction to it be enough to trigger the final church-age, prophetic chain reaction?

Thank you for your concern and for praying for Ukraine and the Ukrainian People,
Sam Slobodian
President – BIEM