Prophetic Impact of Russia’s War on Ukraine! The long-term impact of the war for America and for Believers is very great! Pray for Ukraine! 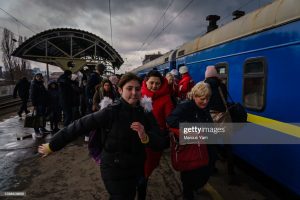 IRPIN, UKRAINE — MARCH 4, 2022: Civilians, mostly women and children rush to board any train car that still has any room on it, as the sounds of battle Ð gunfire and bombing Ð fighting between Russian and Ukrainian forces draw closer to the city of Irpin, Ukraine, Friday, March 4, 2022. (MARCUS YAM / LOS ANGELES TIMES) 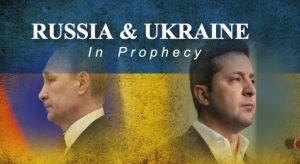 The Prophetic Impact of Russia’s War with Ukraine

The Lord is Sovereign in Times of War and Peace!

“Ever since the pandemic started I believed that all that is going on is setting up for the coming of Jesus and the start of the Tribulation.”

The day after Russia started dropping missiles onUkraine, pastor Greg Laurie took to Facebook with a message. “To much of the world, current events may look like the unhinged machinations of a maniac intent on worldwide disruption. But to believers the war can be viewed as a sign of the second coming of Christ.” Is there any prophetic significance to what is happening in Ukraine right now? The answer is…Yes!

As always, when an end-time event as big as this war breaks out, the internet is ablaze with prophetic forums about the meaning of Russian’s invasion of Ukraine. We hear endless chatter about how Putin is Ezekiel’s Gog and that somehow the war in Ukraine will precipitate the Battle of Gog and Magog’s invasion into Israel because Putin is Antichrist so after Ukraine, Putin will most certainly invade Israel. And on and on it goes including the notion that we are now living in the 7-year Tribulation! Where do I begin?

I sometimes equate Bible prophecy teachers today like the wild, wild west and especially those who have never come to understand the Islamic paradigm in Bible prophecy and therefore have no anchor for interpreting world events. Instead of adhering to a careful, biblical study of the last days, prophecy prognosticators prefer to go off on current events and try to make them fit their version of end times. Sadly, most people don’t know the difference!

With regards to this horrific war, I do not believe it has anything to do with the fulfillment of Ezekiel 38 and Ezekiel 39 and the war of Gog and Magog.  As I’ve taught HERE, HERE and HERE, the Battle of Gog and Magog is simply the Old Testament story that provides the believer with the details of the Battle of Armageddon at the end of the Tribulation.

From these two great prophets, we have everything we need to know about this war and its dramatic ending with the Cloud-Rider appearing with His army in the sky! God always warns his prophets first (Amos 3:7) about major end-time events and so it’s natural for the Old Testament prophets to be describing the Battle of  Armageddon before it appears in Revelation (Ezekiel 38-39; Joel 3:8-17).

Putin is like the ‘new Hitler on a rampage’ and he’s doing exactly what Antichrist will do in the Tribulation but is he Antichrist? Russia “is bombing women and children, nursing homes and hospitals, and everything in between. This is the most aggressive military action that has been taken since World War II and there’s a likely chance Putin will continue to conquer other non-NATO states in parts of Europe. While the Ukrainian army and citizens have put up fiercer resistance than was anticipated in Moscow, Russia is not losing this war.

But according to Ezekiel 38:17, Gog is Antichrist and Putin, although very evil and acting like Antichrist, cannot be Antichrist for two reasons.

First, the Apostle Paul makes it clear in 2 Thessalonians 2:5-8 that the church is not going to see Antichrist! Antichrist, the “man of sin,” will not be revealed until after the Rapture. God is still graciously working out His unique plan for the Church-Age and Jesus is still calling out His beautiful bride (the church) and therefore, the restraining ministry of the Holy Spirit is holding back the arrival of Antichrist until God sends Gabriel and his trumpet to call us home!

In God’s sovereign plans, the Russian invasion of Ukraine has resulted in hundreds, if not thousands of Ukrainian souls coming to salvation and therefore becoming part of the body of Christ and His bride! Some startling testimonies are coming out of the war zone of souls being saved! Instead of the Rapture, God is still building His church!

On an important side note, the war has also brought thousands of Ukrainian Jews back to Israel in fulfillment of Bible prophecy! This is another, important, prophetic implication of this war and how God is using it to fulfill His purposes for Israel.

The second reason why Putin cannot be Antichrist is because Antichrist arrives AFTER the arrival of the Ten-King Empire, not before. Daniel 7:24 makes this point clear.

The ten horns are ten kings who will come from this kingdom. AFTER THEM another king (Antichrist) will arise, different from the earlier ones; he will subdue three kings.

Daniel says that the formation of the ten-king empire is the precursor to the first appearance of Antichrist. Does anyone see a ten-king empire yet? Not me! So why all the internet chatter about Putin being Antichrist and suggesting we are now in the Tribulation?

Long-Term Impacts
Although a possibility, I do not see this conflict escalating to World War 3 at this time. I certainly could be wrong but I say that primarily because so many nations are already in the proper place predicted in the Bible before the start of the Tribulation.

However, it’s becoming more and more apparent this conflict will result in big developments that could push the world closer to the start of the Tribulation.

We currently see the West going all in to isolate Russia financially and economically. This could backfire badly!

The long-term ramifications of this will be interesting to watch and could be a turning point bringing the nations and events of the Tribulation into clearer view:

Despite the perilous times, God doesn’t want His children to live in fear or to stop living your life. If we believe that Jesus is coming back soon than we should be busy about our Master’s business. Plan like Jesus isn’t coming back for 100 years, but live like He’s coming back today,” the old preacher advised.

The worst thing you can do is to get paralyzed and worried. Instead we need to take our cares to the Lord. We have a lot to do until Jesus comes. Live your life, pray for direction from God, and do what you believe God is telling you to do with your life.

Remember this: Jesus is going to be on time and the main thing is for us to be ready!

“For yet a little while,
And He who is coming will come and will not tarry.”
Hebrews 10:37

VISA Program for Ukrainians Wanting To Come To America