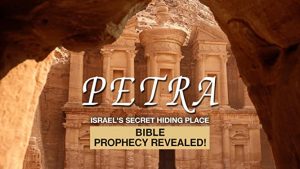 Israel’s Escape To Petra,
Mountain Stronghold
Part 29/15/22 – by Tim Buck
Fotet.orgThen let those who are in Judea flee to the mountains; let him who is on the housetop not go down to get the things out that are in his house; and let him who is in the field not turn back to get his cloak. But woe to those who are with child and to those who nurse babes in those days! But pray that your flight may not be in the winter, or on a Sabbath;
Matthew 24:16-20

Petra, meaning “Rock” in Greek, is a deserted city south of the Dead Sea in Jordan. In the past it was also known as Seir, capital of the Edomites. In later times, the Nabateans settled in the mountain stronghold and called their capital Petra.

The city is situated about 120 miles southeast of Jerusalem. Indications are that an earthquake and volcanic activity occurred, forming a big canyon with rocky ravines and steep cliffs.

The remains of the spectacular city that could hold up to 5 million people consist of temples, tombs and thousands of dwellings carved out of the sandstone cliffs. The only entrance to the city is through a narrow gorge over a mile long, which can easily be guarded and even blocked if necessary, thus rendering Petra a very safe refuge.

An impressive scene greets you when the multi-colored
sandstone formations of the this famous ghost town looms up before you. Added to this is the expectation that, according to Revelation 12:6, it will probably serve as the refuge to a remnant in Israel when Antichrist orders the genocide of the West Bank Jews, lasting for the last 3½ years of the tribulation period.

South of the narrow gorge that offers access to Petra is a valley several miles wide. A few miles south of the entrance to Petra is the Fountain of Moses and his split rock where Moses struck the rock and water gushed forth. During their journey through the wilderness Moses led the Israelites along this valley to the gates of Petra. From that point, they intended passing through Edom’s territory on their way to the Promised Land, but the hostile and vindictive Edomites twice refused their request.

God’s plans for the remnant of Israel when attacked by Antichrist in the middle of the Tribulation is to bring them back to this familiar location to protect them and care for them during the second half of the Tribulation.

Then the woman (Israel) fled into the wilderness, where she has a place prepared by God, that they should be nourished there 1260 days.
Revelation 12:6

The Command To Flee

Matthew 24:15-20 is saying that the moment the Jewish remnant sees the abomination of Israel’s Temple they are to flee to the Judean hills. Why are they to flee instantly? It is because with the event of Antichrist defiling Israel’s temple he goes from protecting Israel to persecuting her.

Therefore, the sooner that the remnant can get out of town, then the less likely it will be that Antichrist and his forces will be able to persecute the Jews. Another reason why they will be able to flee instantly is because they will be miraculously provided for and protected as they make their way to Petra for three and a half years of safekeeping.

Matthew 24:15-20 also provides a set of instructions for the remnant. Christ tells them where to go: the Judean mountains. Jesus says to flee instantly. Don’t even take a few minutes to collect personal belongings like your cloak in the field or a few items from your house for the journey. That could cost you your life.

The winter in Israel is the rainy season which increases the hazards of travel in the Judean hills because the creeks and rivers provide an obstacle not there during other seasons. The mountainous region around Petra can also get snow making travel in the winter more difficult. The Sabbath imposes a travel restriction that is not in force on the other six days of the week that poses a real problem to the observant Jew.

So why are the Jewish remnant supposed to be aware of a special event which triggers their escape into the Judea wilderness, yet they are not told to make any preparations for that day?

While Matthew 24:16-20 focuses upon the remnant’s response to the abomination, other passages provide a more complete picture of their wilderness sojourn. The parallel passage of Revelation 12:6 says Israel will be “nourished for 1260 days.”

The key word in this verse is “nourished.” This explains why the remnant is told to flee without consideration for any provisions, because God has prepared a place where Israel will be nourished and taken care of just like when He sent manna and provided water for ancient Israel.

More about Petra and Israel’s flight into the mountains coming in Part 3. 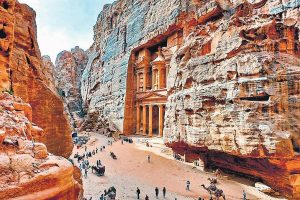