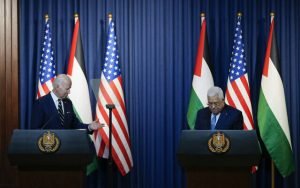 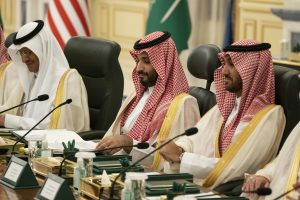 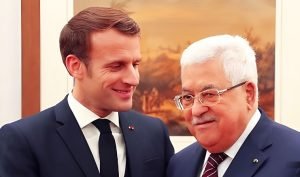 France President Emmanuel Macron urged the resumption of talks towards a two-state solution with the Palestinians and Israel, which he called “the only option to enable a just and lasting peace”.

For The Two-State Plan

7/19/22 by Tim Buck
Fotet.org
Thanks to Joe Biden’s recent pandering to the Palestinians, the two-state solution is making front page Middle East headlines for the first time since President Trump presented his well thought out peace plan in 2019.

I said in 2019 that the Trump plan was by far the most well thought out, two-state plan ever conceived and was so brilliant it could likely become the template for the final plan that prophecy says will be confirmed by Antichrist before the start of the Tribulation (Daniel 9:27).

Although prophesied to happen, God warns Israel not to divide the land under any conditions or they will suffer the consequences of His wrath in the Tribulation (Joel 3:1-3).

Giving back any land to the Palestinians, let alone the heartland of Judea and Samaria, the so-called, “West Bank,” is tantamount to Joshua offering to give back Jericho to the Canaanites. It is an offense to Almighty God who gave Abraham and his descendants all the promised land for eternity!

Yesterday, the Times Of Israel reported that “A senior Saudi minister described normalizing ties with Israel as a “strategic option,” while clarifying that a two-state solution between Israel and the Palestinians was a “requirement” before Riyadh would formalize ties with Jerusalem.”

This means the official line of Saudi Arabia is that while they may be willing to join the Abraham Accords, the ticket price of their admission is nothing less than the dividing of the land of Israel in the two-state solution.

And France’s President Emmanuel Macron would dearly love to broker that deal with Israel and the Palestinians.

For you yourselves know perfectly that the day of the Lord so comes as a thief in the night. For when they say, “Peace and safety!” then sudden destruction comes upon them, as labor pains upon a pregnant woman. And they shall not escape.
1 Thessalonians 5:2-3

After Biden’s visit last week, the Middle East is buzzing with talk of the two state solution between Israel and the Palestinians!

FROM THE TIMES OF ISRAEL:
Palestinian Authority President Mahmoud Abbas will hold talks with French President Emmanuel Macron in Paris this week focusing on the “Israeli-Palestinian peace process.” Direct peace talks between Israel and the Palestinians have not been held since 2014.

Emmanuel Macron: ‘There is no credible alternative to the two-states solution with Israel.’

Macron said, “What can resolve the crisis between Israel and Palestine, surely not unilateral initiatives, nor trampling on the legitimate rights of the Palestinian people to legitimate peace. Nor underestimating Israel’s fair right to security. There is no credible alternative to the two state solution, living side by side in peace and security with Jerusalem as the capital of both nations.”

Tim’s Note: How can anyone be so foolish and blind. Satan wants Israel divided to have a better opportunity at exterminating the State of Israel.

The good news for the church is that these are the last days and with the two-state plan getting closer, it is a strong sign of the soon return of the Lord. Dividing the land is one of the last things to happen before the 7-year Tribulation begins! Keep looking up! 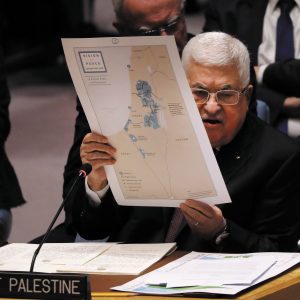 NEW YORK, NEW YORK – FEBRUARY 11: Palestinian President Mahmoud Abbas holds up a Vision for Peace map while speaking at the United Nations (UN) Security Council on February 11, 2020 in New York City. Abbas used the world body to denounce the US peace plan between Israel and Palestine. Donald Trump’s proposal for Israeli-Palestinian peace, which was released on January 28, has been met with universal Palestinian opposition. (Photo by Spencer Platt/Getty Images)