Nuclear War Possibility! The Russian-Iranian Alliance Has World On Edge! 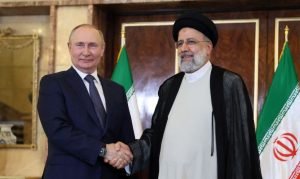 From Moscow’s perspective, having a nuclear-armed Iran, one that is Russia’s ally, will greatly enhance its ability to challenge the West. Pictured: Russian President Vladimir Putin and Iran’s President Ebrahim Raisi hold a meeting in Tehran, Iran.
Nuclear War
Russian-Iranian Alliance Has World On Edge
10/7/22 By Tim Buck
Fotet.org
Russian Nuclear Threat

A Russian military train caught on video is reportedly transporting equipment for the nation’s nuclear weapons program to the frontlines of its war with Ukraine, sparking fears that Russian President Vladimir Putin could be preparing to use nuclear weapons on the battlefield amid his nation’s mounting losses in the war.

“Such videos are never released by chance. I’m 100% sure that there was a purpose behind posting or releasing such a video,” Konrad Muzyka, an aerospace and defense consultant focused on Russia and Belarus, told CBS News.

The video surfaced amid reports by CBS News that the U.S.-led NATO military alliance had warned its member nations that Russia could be preparing to test its nuclear-capable Poseidon torpedo.

“Going forward, we are going to see more reports about Russian activities that relate to nuclear weapons, that relate to drills of units which can potentially be carrying nuclear warheads,” Muzyka said.

“Russia will try to increase the pressure on the West, and it will try to indicate to the world that, from its point of view, the nuclear option is being considered.”

Adding salt to Russia’s wounds is the mysterious explosion of Nord Stream 1 & 2, Russian’s gas lines to Europe. Following the explosion, the Swedish Minister of Energy suggested that the explosion was likely the result of an attack from another country. Russian foreign intelligence is claiming that a western country was involved in the execution of the incident.

Russia continues to target the civilian population in Ukraine. Last week, the Russians hit a convoy of Ukrainian refugees trying flee the contested region of Zaporizhzhia. At least 23 people were killed in the attack.

However, the most notable moment related to Russia surfaced when Vladimir Putin announced that four Ukrainian provinces have been officially annexed to Russia. As of this week, Russia considers any attack against these annexed areas an attack against Russia itself. The Biden Administration responded with widened sanctions on Russian officials following the announcement of the annexation.

Not only is Russia hinting at the future use of nuclear weapons in Ukraine, but the Chechen Republic is also encouraging the Russians to proceed in this manner following the Russian retreat from Liman in Eastern Ukraine. Just days ago, NATO warned its member states of Russia’s deployment of the K-329 Belgorod Nuclear Submarine equipped with the Poseidon Nuclear Missile. This week, Russia began nuclear tests on its border with Ukraine.

Russia even has its hand in what’s taking place regarding oil output of OPEC’s announced dramatic decrease. The current oil cut is the largest since the onset of COVID-19 in 2020. Russia is influencing this lack of output in an attempt to increase oil prices around the world.

Iran continues to struggle internally with a host of riots taking place in opposition to the corrupt regime. Recently, at least 19 people were killed and several others were injured in the Sistan and Baluchistan provinces alone.

A statue of the late Iranian General Qassem Soleimani was set on fire at one of the protests. He’s considered a national hero in the eyes of the ayatollahs. But Iran has other problems, as its currency, the rial, hit an all-time low of 330,000 rials to one dollar.

A young lady named Nika Shakarami was kidnapped by Islamic Revolutionary Guard Corps (IRGC) forces throughout the protests last week. After an extensive search for her body, her family was asked to come identify that which was found. She had been beaten extensively before being killed.

When it comes to Iran and Russia, Iran is being humiliated by its own people and is imploding economically. Russia is being embarrassed on a global scale due to its lack of success in Ukraine and is dealing with a crumbling economy.

While these two despotic regimes seem determined to forge an alliance, however, their objectives are completely at odds with the demands of their citizens, whose primary concern is securing their freedom, not supporting the military aspirations of the ruling elites.

In Russia, the hostility among ordinary Russians to Putin’s regime has manifested itself in nationwide protests against the Russian leader’s attempts to mobilise 300,000 reservists to help support his disastrous military campaign in Ukraine.

Nationwide disgust at Putin’s unprovoked assault on Ukraine has seen hundreds of thousands of young Russians fleeing to the borders in a desperate attempt to avoid the horrors of conscription and being made to fight in a war none of them supports.

In Iran, meanwhile, the death of 22-year-old Mahsa Amini as she was detained in custody by Iran’s morality police, allegedly for refusing to wear a hijab, has resulted in Iranians of all ages taking to the streets across the country in mass protests and shouting “death to the dictator”, a reference to the country’s Supreme Leader, Ayatollah Ali Khamenei.

Iran’s security forces have reacted to the anti-government protests with their customary brutality; figures at the time of writing estimate at least 76 people killed in the government’s crackdown. Even so, the anti-regime protests have continued to spread, with more than 80 cities and towns affected by the violence since Amini’s funeral on September 17.

For many Iranians, the death of Amini, who reportedly died after being struck several times on the head, is the last straw, and the demonstrations represent the biggest anti-government uprising since the 2009 Green Revolution.

The deepening unrest in both Russia and Iran should certainly give the Biden administration pause for thought as it weighs up its next move on the nuclear negotiations.

There is growing concern in Washington that Biden is preparing to sign a new deal with Tehran once the midterm elections have been concluded, and that his officials are prepared to sign a far weaker version of the deal than that originally agreed to in 2015.

At a time when both the Russian and Iranian governments are battling nationwide dissent, this would be a grave miscalculation on the part of the Biden administration.

This should be the moment when the US and its allies are intensifying the pressure on both Iran and Moscow, not capitulating to their interests with a weak nuclear deal which will only encourage them to indulge in further acts of aggression against the West and its allies.