News Of Prophetic Significance Around the World! Israeli Strikes Again! 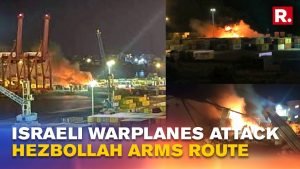 A targeted warehouse and underground secret facilities, located in Syria, reportedly destroyed thousands of missiles stored for Hezbollah and assembled under the supervision of Iranian Republican Guard Forces. 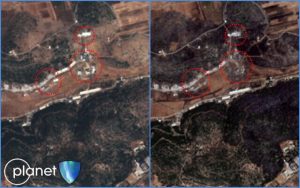 Satellite images taken by Planet Labs show heavily damaged structures at the Scientific Studies and Research Center of a Syrian weapons base near the northwestern city of Masyaf in an Israeli airstrike.

Israel attacked the large, central, underground complex and military arsenal built by Iran that allows the Syrian Agency for Scientific Research to accumulate in a protected manner, thousands of components to assemble precision missiles and from there to gradually smuggle them to Hezbollah in Lebanon. 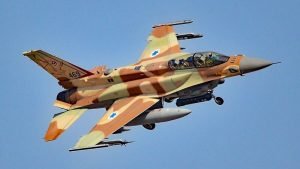 Plus
News of Prophetic Interest
Around the World

Thus says the Lord God: Come from the four winds, O breath, and breathe on these slain, that they may live. So I prophesied as He commanded me, and breath came into them, and they lived, and stood upon their feet, an exceedingly great army.
Ezekiel 37:9-10

An airstrike Thursday on the Syrian city of Masyaf attributed to Israel hit a missile warehouse containing more than 1,000 Iranian-made missiles, the Syrian Observatory for Human Rights (SOHR) reported on Saturday.

Syrian air-defense systems were activated in northwestern Syria on Thursday, with Syria’s state news agency SANA reporting that local forces were “confronting hostile targets” above Masyaf. Later, the agency said the airstrike was an Israeli attack.

The observatory added that 14 Syrian civilians sustained injuries with varying levels of severity during the Masyaf airstrike, in addition to casualties reported among Iranian-backed militias guarding the research center– which was heavily damaged during the attack.

Moreover, several fires broke out in areas surrounding the city ignited by the shrapnel from the explosions of the warehouse, with nearby civilian houses and property suffering material damage, the report said. Secondary explosions continued for hours after the strikes, along with the blazes caused by them. Local residents were reportedly instructed to remain in shelters until the fires were brought under control.

In addition to the strikes attributed to Israel, the United States also engaged in a string of tit-for-tat attacks last week against Iranian militias in northern Syria who had targeted US forces with rockets and drones.

Iran-backed militias have established a large foothold in Syria while fighting in support of President Bashar al-Assad during Syria’s civil war. 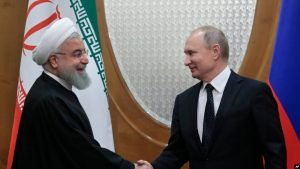 The $40 billion memorandum of understanding (MoU) signed last month between Gazprom and the National Iranian Oil Company (NIOC) is a stepping stone to enabling Russia and Iran to implement their long-held plan to be the core participants in a global cartel for gas suppliers in the same mold as the Organization of the Petroleum Exporting Countries (OPEC) for oil suppliers.

With a foundation in the current Gulf Exporting Countries Forum (GECF), this ‘Gas OPEC’ would allow for the coordination of an extraordinary proportion of the world’s gas reserves and control over gas prices in the coming years. Occupying the number one and number two positions in the world’s largest gas reserves table, respectively – Russia with just under 48 trillion cubic meters (tcm) and Iran with nearly 34 tcm – the two countries are in an ideal position to do this.

The Russia-Iran alliance, as evidenced in the most recent multi-faceted MoU between Gazprom and the NIOC, wants to control as much of the two key elements in the global supply matrix – gas supplied over land via pipelines and gas supplied via ships in liquefied natural gas (LNG) – as possible.

According to a statement last week from Hamid Hosseini, chairman of Iran’s Oil, Gas, and Petrochemical Products Exporters’ Union, in Tehran, after the Gazprom-NIOC MoU had been signed: “Now the Russians have come to the conclusion that the consumption of gas in the world will increase and the tendency towards consumption of LNG has increased and they alone are not able to meet the world’s demand, so there is no room left for gas competition [between Russia and Iran].”

He added: “The winner of the Russia-Ukraine war is the United States, and it will capture the European market, so if Iran and Russia can reduce the influence of the United States in the oil, gas and product markets by working together, it will benefit both countries.”

The Russian energy giant Gazprom recently informed the French gas company who relies on Russian gas: “Due to problems in the contract” not all the gas will be supplied. 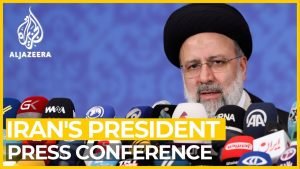 In June, the IAEA Board of Governors passed an anti-Iran resolution proposed by the United States, Britain, France and Germany following the agency’s reports that Tehran had not provided “technically credible explanations” for the uranium particles found at three undeclared sites.

Today the Iranian president said that without the closing of this investigation a deal can not be achieved.

What the Iranians basically say is:

“We fooled you , you know that, we know that, but if you want a deal you must pretend it never happened”.

In the coming weeks, Israel will need to step up its activities against Iran

A new nuclear agreement between Iran and the powers seems closer than ever, after the significant progress in the list of demands sent between the parties. The Mossad presented Prime Minister Lapid with an assessment according to which the agreement will be signed in the near future, within a few days to several weeks.

At the same time, the Mossad and the IDF will be prepared for a line of action on, among other things, the increase of Israeli activity throughout the Middle East against Iran. This will include thwarting Iranian terrorism, thwarting the smuggling of Iranian weapons to all countries and organizations in the region – and not just activity on Iranian soil.

It can be assumed that the Mossad and the IDF have built extensive and significant infrastructures in a number of countries throughout the Middle East. These infrastructures will allow them to do what we have seen, including intelligence and operational penetration into the Revolutionary Guards in Iran and a much wider maneuverability in a long list of countries.

More of Raisi’s Lies and Threats

“The presence of the US in the region threatens the security and stability of the region. Israel’s threats express its fear and we advise it not to start any aggression because it may not exist. All Israel’s threats and measures will not help them stop our path, and they are aware that they are unable to confront us. Israel never wanted Iran to get the technology, but Iran got it anyway. Our peaceful nuclear capability is Iran’s right, and no one can prevent it from this right.”

Have you ever heard such a string of lies? Of course, neither God or Israel is unaware of the lying tongue of the evil Prince of Persia (Dan. 10:14, 20) who stands against Israel in the latter days.

Israel recently revealed that in the midst of the nuclear talks: Iran has begun enriching uranium in one of the 3 advanced centrifuges clusters recently installed in the underground facility in Natanz.

God is not fooled and reminds us, “whatsoever a man soweth, that shall he also reap?”

Satan, the great liar and hater of God’s chosen people “is a thief who comes to steal, kill and destroy. But Jesus came that we might have life and enjoy life more abundantly.”
John 10:10 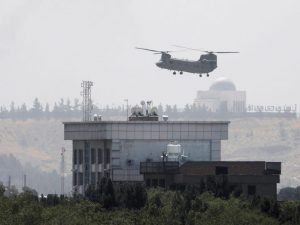 20 killed in fresh clashes as U.S. officials leave Bagdad Embassy via rooftop evacuation and emergency airlifted off the U.S. Embassy out of the Green Zone, Baghdad Iraq. 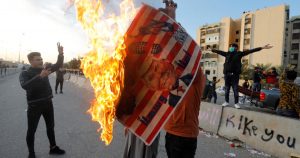 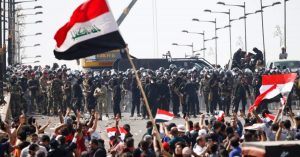 A new wave of anti-government protests rocked war-torn Iraq as at least five people were killed during violent clashes in Baghdad; meanwhile in the south protesters set fire to government buildings

Chaos Across Iraq as Violence Soars

Baghdad is plunging into more instability with rioters now inside the presidential palace in Baghdad.

The Iraqi military declared a curfew in Baghdad. UN and foreign embassies personell vehicles are leaving the green zone. The government suspends all its meetings. Iran closed its land borders with Iraq until further notice and Kuwait is urging its citizens to leave Iraq immediately.

After the important Shiite leader Muktada a-Sidr whose party won the majority in parliamentary elections decided to withdraw from politics and shut down the offices of his political party, his followers stormed into the presidential palace in Baghdad. They suspect that Iran made the threats and is behind this move to destabilize and gain more control.

A- Sidr is a loud opponent of Iran’s intervention in Iraqi affairs and the rumors are that killing squads were sent to assassinate him.

As government forces open fire on protesters, locals decided to respond with the same coin. Full out up rising on the way paving the way for more bloodshed and suffering.
So far the clashes are between the supporters of the prominent Shiite cleric Moqtada al-Sadr and the security forces.

Once the clashes will start between them and the pro-Iranian militias it can rapidly escalate into a full blown civil war.

The protests are similar to those that have engulfed Lebanon in recent days. Incitement and chaos is easily encouraged by Iran in that they are economically-driven, largely leaderless and spontaneous against a sectarian-based system and a corrupt political class that has ruled for decades and driven the two countries to the brink of economic disaster. 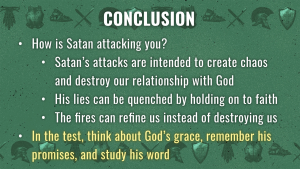 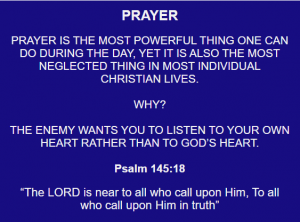