Get Ready for the Star Spangled Shariah in America as our enemies ban together. The Muslim group C.A.I.R. has now joined with Black Lives Matter calling for Islamic Revolution. Once again, we see the true, Anti-America and Anti-Israel colors of Black Lives Matter as they publicly announce their alignment with radical and pro-Muslim Brotherhood, C.A.I.R. 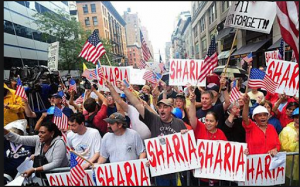 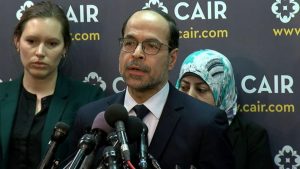 Nihad Awad, director of the Council on American Islamic Relations (CAIR), announcing they are joining with Black Lives Matter to work together to bring down America.

Awad is the director of CAIR, the largest pro-Muslim organization in the United States. C.A.I.R. is subtle, dangerous and has successfully infiltrated both houses of the U.S. Congress and the previous administration. The Council on American Islamic Relations (CAIR), which enjoyed a cozy relationship with President Obama for 8 years, announced they are joining with #BlackLivesMatter and calling for revolution and stopping the re-election of President Trump. In 2007 CAIR was listed as an “Un-indicted, Co-conspirator” in the terror trial of the “ground-zero,” Holy Land Foundation. CAIR serves Allah like the point on the Islamic spear into the heart of America and use their deep pockets to conspire against America. In his recent speech about aligning with Black Lives Matter, Awad said, “Muslims are the new black people of America, you are being denied rights, you are being denied the American Dream… If we don’t stand, you will see Muslims murdered in the streets. We are the community that staged a revolution around the world.. why can’t we do that in America?” “We are the children of Muhammad… YOU KNOW WHAT YOU SHOULD DO… if we do it, Allah has promised us the same victories as those who came before us.” CAIR was one of 82 groups designated as a terrorist organization by the United Arab Emirates (UAE), placing it in the company of Al Qaeda, Islamic State and other radical groups. Despite CAIR being directly linked to the terrorist group Hamas, it held dozens of meetings with the Obama Administration and will return if Joe Biden is elected. Even with their, “hate America first” ideology and radical Islamist associations, CAIR continues to be portrayed by mainstream media in a positive light as an innocent, pro-Muslim organization. But don’t be fooled! The head of CAIR said that Muslims could comprise the swing vote in the presidential elections if 1 million of them registered to vote, as he urged them to turn mosques into polling stations. 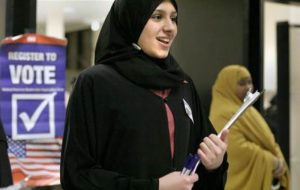 Muslims plan to make their voices heard at the polls… and so should Christians. Pray For America in 2020!