Muslim Demographics and the Great Delusion: Will Psalm 83 and Ezekiel 38 Cause Islam to Disappear in the End Times!

Will Psalm 83 and Ezekiel 38 Cause Islam to Disappear in the End Times?

The purpose of this article is to address what has in recent years become a widely held prophecy theory regarding Psalm 83 and Ezekiel 38-39. The theory, popularized by Bill Salus in his book Isralestine, holds that the Bible predicts two specific invasions before the Tribulation Period begins that change the demographics of the end times.

The Christian church and the rest of the non-Muslim world is about to have a head-on clash with a very real demographic giant. Recognizing the epic proportions of this coming clash, some people (like myself) are shouting from the rooftops to prepare for the massive challenge ahead. Others, however, seem to be determined to lull the church back to sleep. “Don’t worry,” they say, “The giant will suffer a massive heart attack before he even arrives at the battle lines. Go back to sleep.”

Present demographic realities make it clear that as the church continues to slow down its growth globally, the religion of Islam is simply outpacing us. An acknowledgment of demographic trends today and understanding the Islamic connection to end-times prophecy make it clear that Islam represents the single greatest challenge the Christian church will face before the return of Jesus. But the church is largely asleep to the danger of this reality, assisted by a new theory.

One of the more successful false teachings to invade Bible prophecy over the last decade is rooted in a false interpretation of the Scriptures, and a poor understanding of global demographics. The giant in the room is Islam and to remove it, the teaching says that through two end-time wars, before the start of the Tribulation, the religion of Islam will be wiped off the face of the earth and pave the way for Antichrist to rise from Europe. Hmmm.

The two wars used to try to prove their “Islam is dead” theory is a supposed war in Psalms 83 and the battle of Gog and Magog in Ezekiel 38-39. Most scholars reject the view that Psalm 83 is even an actual prophecy but is simply a national prayer of lament. It is also abundantly clear that the Battle of Gog and Magog is simply telling the Old Testament story of the Battle of Armageddon that takes place at the end of the Tribulation and ends in Israel’s salvation.

The “Islam is dead” theory is a recent invention to discredit the Islamic end-time paradigm which correctly believes the religion of Islam will give rise to Antichrist. Driving the movement is also the need to find support for the outdated and unsupportive, “revived Roman empire” theory.

The “Rome is coming back” theory is falsely rooted in a misinterpretation of Daniel’s fourth empire that is discussed in both Daniel chapters two and seven. A more careful analyses of these two chapters reveals that the fourth empire that Daniel talks about points to the Islamic Caliphate not the ancient Roman empire. For numerous reasons outlined in chapter two of my book, The Empire of Antichrist, the ancient Roman empire simply does not meet the requirements of the text describing Daniel’s fourth empire. However, the historic Islamic empire meets all the textual requirements perfectly.

According to the theory, Salus postulates that the two wars of Psalm 83 and Ezekiel 38-39 are pre-tribulation battles that wipe out 100% of the world’s Muslim population. He theorizes that as a result of these two wars, the world’s Muslim’s will simply vanish before the Tribulation begins, perhaps even quite soon.

He refers to the Psalm 83 battle as the removal of the “inner circle” of Muslim nations around Israel today. The “Inner Circle” map overlays the ancient names of Psalm 83 (in red) with their supposed modern-day counterparts map. Then he refers to his map of Ezekiel 38 as the removal of the “Outer Ring” of Muslim nations around Israel. And WAHLAH, there you have it… the Muslim’s are gone! Now you see ‘em… now you don’t! 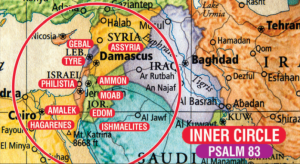 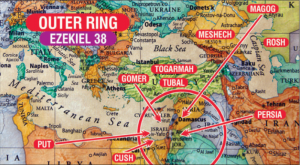 To rescue the revival of the Roman empire idea, unfortunately, multiple modern prophecy writers have grabbed onto this theory like a rescue line to a drowning swimmer. If you don’t believe the theory is widely taught, consider a sampling of comments made by popular prophecy teachers as they do their best to articulate the view:

“There is no need whatsoever to warn the Bride of Christ [the church] about some non-existent Islamic (sic) myth … Islam will not exist by the time the 70th Week begins.” – Sean Osborne

“The war of Psalm 83 followed by the war of Ezekiel 38 will result in the annihilation of nearly all the armies of the Muslim nations of the Middle East … The Middle East will be reduced to ashes! … There are two wars that are indicated most likely before or just at the beginning of the Tribulation… In my opinion, those wars are going to pretty well wipe out the Muslims in the Middle East.” – David Reagan

The problem with the comments of these good men is they fail to recognize the actual demographics of the Muslim world. Apparently they believe that most of the world’s Muslims live in the Middle East. The truth, however, is that the vast majority of Muslims live outside of the Middle East. In fact, almost half of all Muslims globally live in the four countries of Indonesia, Pakistan, India and Bangladesh. Indonesia has a Muslim population of 276 million, Pakistan has 225 million, India has 300 million and Bangladesh has 153 million. Yet neither Psalm 83 nor Ezekiel 38-39, the two passages that this view claims will soon “wipe out” Muslims and Islam globally, include these nations.

The large majority of the World’s Muslims live outside of the Middle East. For example, today there are more Muslims in either France (3.5 million) or Germany (5.5 million) than in Lebanon (2.5 million).

This is where Bible prophecy and fantasy collide with the harsh realities of demographics. If we listed every nation suggested as part of Psalm 83 and Ezekiel 38-39, this would still represent less than one-third of the world’s Muslim population.

So let’s test the demographics of this theory. If every soldier and every active-duty member of the nations suggested as being part of the supposed Psalm 83 invasion and Ezekiel 38-39 were gone, it would approximately represent
31,213,730 soldiers, less than 2 percent of the total 1.8 billion Muslims of the world. So because a mere 2 percent of the Muslims of the world are defeated, somehow this means that the other 1.6 billion Muslims no longer exist?

Let’s take this scenario one step further. Let’s imagine that not just the active-duty soldiers but every single person in every one of these nations was removed from the picture, leaving not a single survivor, man, woman, or child, from Russian to Sudan, something no one is suggesting will occur, how would this change things? Would Islam be “wiped out” as they claim? Far from it. In fact, there would still remain well over a billion Muslims worldwide. Islam would continue to have more adherents than Protestant Christianity globally. Muslims would continue to be a vast and vibrant force worldwide.

As we can see, even if all the nations suggested within the Psalm 83 and Ezekiel 38-39 wars were wiped out, there would still remain more than two-thirds of all Muslims in the world and the four largest Muslim nations would be untouched. Any suggestion that Islam will disappear from earth before the rise of Antichrist and the 7-year Tribulation is a fantasy.

No amount of denial, prophetic manipulation, or wishful thinking will make Islam go away. It’s not going to happen. It’s time for the church to wake up to the reality that Europe is dead not Islam. It takes the European Union five years to decide on the most mundane matters. The overwhelming biblical evidence is that Muslim’s are deceived by Satan today and are already positioned to participate in the great clash of the Tribulation aimed at destroying the non-Muslim world and Israel.

Far too many Christians have chosen to ignore the looming danger and rising threat and are sitting back and daydreaming about the time when Islam will go away. Instead we need a more aggressive approach, like David took toward the giant, of reaching Muslim’s with the Gospel of Christ and warning our fellow believers of the danger closing in.

Then it happened when Goliath the Philistine rose and came and drew near to meet David, that David ran quickly toward the battle line to meet him.

You know the rest of the story.