Joe Biden and Bible Prophecy: Will God can use the US President to Usher in the Tribulation? 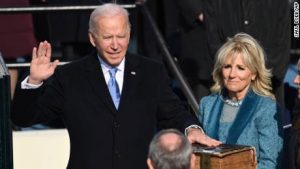 JOE BIDEN has been inaugurated as the 46th President of the United States and that means his time in office will be spent enacting policies that will propel the world closer to the Tribulation Period.

The next 4 years have the potential to be the perfect storm of geo-political, events that could drive the world into the final 7 years.

With Trump removed, the world is sitting more vulnerable than ever with the world’s bad actors already getting an itchy trigger finger! The sudden departure of Trump and the draw down of the US military in the Middle East has left a vacuum waiting to be filled.

Brace yourself, as the final series of key prophetic events could erupt during Biden’s watch.

Dropping American safeguards to protect Israel’s interests, the realignment dividing the Middle East, the growing influence of pro-Israel Arab nations, the rise of the Turkey-led Islamic Caliphate, the advancement of the peace process and dividing Israel are all final pieces of the last-days puzzle that could advance simultaneously to usher in Antichrist and the Tribulation in the next four years!

And all of this could be occurring while our feckless leaders are distracted watching America’s economy teeter on the brink of collapse.

Is this why God put a weak leader in the Whitehouse?