Is God Judging America? An Open and Frank Discussion of America’s National Crises 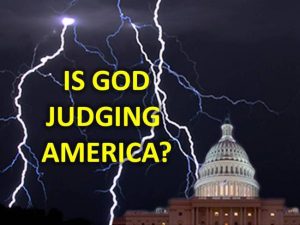 America is in serious trouble. Although hard to accept, a biblical evaluation of our current national crises signals God’s judgment is beginning to fall on America!

The Blind Leading the Blind

There’s an ancient saying that dates back to 1546 when John Heywood said, “There are none so blind as those who will not see. The most deluded people are those who choose to ignore what they already know.”

Sadly, this quote aptly describes the majority of pastors today in the United States, even many of those who preach in churches whose statements of faith affirm the inerrancy of Scripture.

With a strictly earthbound vision for the future that pushes the Lord’s return to a far distant time, church leaders tell us that the turmoil of our present-day is part of a reoccurring cycle of history and that life will return to normal after the current crisis passes.

Pastors Refuse To Speak Up

Why is it that so many pastors and believers fail to see the dangers behind what’s happening in America and are too blind to recognize the uncanny resemblance of what they hear to what John wrote about in the book of Revelation?

David Horowitz, despite his atheism, wrote a book warning of the severe persecution coming to Bible-believing Christians in America (Dark Agenda). Peter Koenig, a geopolitical analyst, and previous Senior Economist with the World Health Organization, keeps warning people of the threat posed by “The Great Reset” championed by the World Economic Forum (WEF) and of the dangers posed by ID2020 and COVID-19 vaccines, although to my knowledge he is not a follower of Jesus.

Why do Horowitz and Koenig clearly see the perils ahead for us that so many pastors refuse to acknowledge? Although these secular writers do not believe the Bible, they warn of a future that’s remarkably similar to what we read about in the book of Revelation about a world turning away from God and turned upside down.

The warning lights are everywhere that should be obvious enough to wake up those in Christ to the approaching Tribulation Period as well as to the nearness of the rapture that occurs before it.

Today’s pastors refuse to talk about any of this. The church today in America resembles the Laodicean church more than at any other time in our history. Sadly, conviction is replaced with complacency, and God’s glory is often replaced with gimmicks and marketing ploys.

In most cases, pastors only talk about having your best life now, positive emotions, and taking control of your mind. Granted, we need to be encouraged, but if that’s all we talk about, the church is in trouble. Paul told Timothy to “give heed to sound doctrine” and to “preach the word.” The American church finds itself today awash with worldly concepts because it disdains the heat of conviction and doesn’t want to “rock the boat.”

From a biblical perspective, the Lord’s judgment of America is long overdue. There is plenty of evidence to back this up. Does not the ongoing horror of abortion that has led to the merciless slaughter of millions of innocent lives tell us that God’s judgment is coming?

Not only have our elected leaders refused to outlaw this murderous practice, but they stand by as Planned Parenthood butchers babies and sells their body parts to the highest bidder and demand those who oppose abortion continue to fund its barbaric practice with our tax dollars. Abortion is an abomination that is bringing God’s wrath upon America.

The list continues. America is the world’s largest producer of pornography, the world leader in radical environmentalism, the strongest state proponent of the LGBTQ agenda and transgenderism and has foolishly enshrined their immorality into the platform of the 2020 Democratic party (I have written about this HERE).

The Democratic party has taken Romans Chapter One, which lays out the immoral practices that God hates, and has adopted these evil practices into their 2020 platform in writing as important behavior for American society. They’ve taken evil and declared it good. The Lord hears each and every muffled scream of the young boys and girls caught up in the horrors of sex trafficking.

Are we so naïve to assume the Lord will not judge the U.S. and world for its abominations that so deeply grieve Him? Are we so foolish as to think that Psalm 94 refers only to the distant past without prophetic significance for the day in which we find ourselves?

In 2012, Billy Graham quoted his wife Ruth as saying, “If God doesn’t punish America, He’ll have to apologize to Sodom and Gomorrah.” The wickedness to which she referred has grown exponentially since she spoke those words sometime before her death in 2007.

I am not a prophet, but my view is that God’s judgment is already falling upon America and His goodness and graciousness is already moving away from America. There are two reasons why I have come to that conclusion.

The first is because division is one of the most repeated methods God uses in scripture to defeat those who oppose him. He even uses it at the Battle of Armageddon (Zech. 14:13). Over and over, when God decides to judge a nation, He turns the people against each other. Sound familiar?

The second method God uses, which is often seen in ancient Judah, is that He allows corrupt and immoral leaders to rule the country. Both these methods are prevalent in America today! Despite what the media says about the intellectual talent and leadership of Joe Biden and Kamala Harris, if God brings such corrupt leaders into the Whitehouse it’s not by accident.

Sadly, my view is that the deep divisions and turmoil that characterize life here in America are already compelling evidence of God’s judgment. And the 2020 election has only managed to deepen the divide beyond the point of no return. How can things ever “return to normal” in this country when one side believes the other side has literally stolen the presidential election? Could God have prevented this? Of course.

The Danger Of A Biden Presidency

There has been a lot of talk lately about the Great Reset (e.g. resetting the economic and the geopolitical aspects of the world with one group overseeing it; (more HERE)

Those of us who are concerned about freedom, religious expression, morality, and a plethora of other topics, are not fans of a Great Reset.

The Great Reset is so much more than the utopian dream of unrealistic, western globalists. It’s the fervent desire of the “deep state” in America and is something that both the Democrat and Republican establishments desire.

The MAGA philosophy of President Trump stands virtually alone in opposition to the globalist agenda in the U.S. Most Republicans in the Congress and Senate have already abandoned the President and his efforts to expose the great fraud so apparent in the November 3 election.

For more on this, check out this compelling interview and this mammoth document that includes 270 pages of evidence just released by Sidney Powell.

John Kerry, whom Biden has named as his “special presidential envoy for climate,” recently affirmed Biden’s allegiance to the World Economic Forum (WEF) agenda. He assured the elites of the WEF that a Joe Biden presidency would quickly advance the globalist “Great Reset” agenda “with greater speed and greater intensity than many might imagine.”

It’s clear that a President Biden (or Harris) will not tolerate any hint of dissent to their rabid support for abortion and the LBGTQ agenda. Their previous statements and appointments confirm this as does the advice that many in Congress have already given to them.

Under a Biden/Harris administration, any church that hopes to exist in its current form in the year 2025 (the end of their term) will only do so by agreeing with their radical agenda regarding transgenderism for children, homosexuality and abortion up to the moment of birth. It’s not like we didn’t know this was coming but the church in America is heading for more perilous times.

Signs Of The Approaching Tribulation

The evidence that we live in the last days is overwhelming, yet so many remain blind to what they see. They repeat the error of the Pharisees and Sadducees who failed to recognize the signs that their Messiah stood among them (Matt. 16:1-3).

The lawlessness and immorality of our day, the reshaping of the Middle East through the Abraham Accords peace agreements between Israel and their Arab neighbors, the decline of America and the great delusion of our day all speak to the rapid approach of the seven-year Tribulation.

In addition, the emphasis on “peace and security” in Israel and the Middle East, pointed out in 2 Thess. 5:3 as the day of God’s judgment approaches, tells us that the church has little time left until our departure to be with Jesus (1 Thess. 4:13-5:10).

The signs Jesus gave us of His coming in Matthew 24 precisely describe the day in with we live. It’s as if He opened up a laptop and read news headlines from 2020 to His disciples. In verse 15, the Lord refers to Antichrist’s desecration of the temple that takes place halfway through the tribulation.

How close are we to seeing Israel’s Temple being built on the controversial Temple Mount? A lot closer because of the Abraham Accords. The Temple Institute in Jerusalem has recreated all the furnishings for the third temple including the Ark of the Covenant, have architectural designs for it in place, and are already training Levites to act as priests in the new temple.

The Lord does not need to write His message of impending judgment on the wall as He did for King Belshazzar in ancient Babylon. He has clearly revealed His warnings for all to see in Scripture, yet so few recognize their relevance for today. They refuse to acknowledge what they know from God’s Word.

Jeremiah wrote, “They have healed the wound of my people lightly; saying, ‘Peace, peace,’ when there is no peace” (6:14). If the prophet were alive today, I believe he would similarly warn us of shepherds who ignore the signs of God’s impending judgment and the Lord’s imminent return and insist that life will someday return to normal just as in the past.

Biblical encouragement that does not include an awareness of the end times and Jesus’ appearing may comfort believers to some extent, but it only heals the wound “lightly” of those who face economic disaster, personal afflictions, tragedies, and the many other harsh realities of life under COVID-19 imposed lockdowns, draconian restrictions, and falsified panic.

The good news is that we serve an awesome and sovereign Lord who controls history and kings and who will soon reign over the nations of the world (Zech. 14:9). He’s not surprised by how wicked the heathen behave. He revealed long ago what the people would be like in the last days just as we see taking place today.

The best comfort we have in these perilous times is that Jesus is coming to take us to the place He’s preparing for us (John 14:1-3) and all the signs point to this happening in the near future. The times may be dark, but we possess a glorious hope full of the Light of Jesus!

Even so come Lord Jesus.