Is A New World Order Coming? Both Biden and Putin have evoked a “New World Order” in the context of the Ukraine War. Should we be worried?

For Christians who believe that truth matters, I’d like to offer my opinion on what I perceive are the widely misused terms of the New World Order, Globalists and the Great Reset. These hot button phrases are misleading and confusing and are western ideals but not biblical concepts. I’d like to encourage serious students of the Bible to rethink the topic of a one-world government in the last days!

The throwback conspiracy theory known as the “New World Order” is enjoying a renaissance.

President Biden mentioned the “new world order” in mid-March at a Business Roundtable meeting, “Now is a time when things are shifting,” Biden said when asked about the United States’ response to Russia’s invasion of Ukraine. “There’s going to be a new world order out there, and we’ve got to lead it.”

Biden’s comments came not long after conspiracy theorists pounced on a remark by a Ukrainian MP during a recent interview with Fox News. “We not only fight for Ukraine; we fight for this new world order for the democratic countries,” Kira Rudyk said in the interview.

Due to the proliferation of fringe narratives on social media that cast Ukraine as a pawn in a supposed nefarious scheme by global elites, the new world order conspiracy has gained new lifeblood.

Whenever “new world order” is mentioned by a world leader it seems like American Christians and prophecy social media circles, go wild with claims that, “this is It,” and the “one-world movement” is finally here.”

When President George Bush used the phrase New World Order in his speech in 1990, those in the Bible prophecy community went bonkers. This was IT. This was the Beast of Revelation 13 which means the reign of Antichrist and the return of Jesus was right around the corner!

Ignored was the context of Bush’s statement which only reflected a post-Soviet Union, post-Cold War era where there were no more competing superpowers, but a flexible realignment of military power to address things like Saddam Hussein’s recent invasion of Kuwait.

But as is always the case with conspiracy theories, the lack of a full context feeds the deception. Christian Bible prophecy folks had already made up their minds that the “New World Order” or “Globalism” WAS what the Bible was referring to in Revelation – it HAD to be. But the context of Bush’s words (or Biden’s for that matter) are not what the Bible describes.

For 30+ years since then, Bible prophecy teachers have been filling up YouTube and Telegram with “Globalists” this and “Globalism” that, as if it’s a biblical concept and you MUST agree or you are… wait for it… one of “THEM.”

And now we can add “The Great Reset” to the list… thanks a lot COVID. Yet another nothingburger. The Great Reset is allegedly about the “global elite” using COVID to dismantle capitalism and enforce radical social change to make way in America for something like communism. There are certainly many who would like to see America turned into a communist state but that isn’t proof we’re on the verge of a one-world government taking over.

Instead of an articulate study of biblical end-time events, conservative Christians just keep getting stuck on the latest one worldism news and keep driving up book sales with scary titles. Instead, we would do well to remember that Satan’s deceptions and man’s inventions are always shiny objects appealing to the flesh.

One World Government, the New World Order and the Great Reset are in reality, non-biblical, western concepts. This is not to say there is no such thing as “globalism” or that many leftist politicians do not seek to advance a “post-Christian” worldview. It exists and so do they, but it’s the assumptions to shoehorn their beliefs into Bible prophecy that confuses many.

These catch-all phrases may be a path that some western elites would like to see prevail but the concepts bely the reality of our world today. One-worldism is not taught in Bible prophecy and Christians should not assume it’s coming! Yet most do. Although taught by many, a one-world government doesn’t align with the scripture about Israel, the nations and the world in the last days.

Any discussion about a “great reset” or “new world order” must consider two crucial factors.

First, consider the other half of the world before jumping to conclusions. Non-western countries, anti-American and anti-Israel countries who are difficult for the west to engage with will never surrender their autonomy for a western globalist agenda.

That would be the unpardonable sin for Muslim nations who make up one-quarter of the world’s population. Islam’s footprint includes 57 countries dedicated to the demise of the west and the fulfillment of the Quran. If you think they’re locking arms with the great reset you are badly mistaken! If given the opportunity (which comes during the Tribulation) they would choose Jihad over appeasing anything that has to do with western ideals. A host of a hundred terror groups and bad actors like Iran, Iraq, Afghanistan, Syria, Turkey and others are fully dedicated to the notion of destroying Israel, America, the west in general and Christianity in particular.

And what about nuclear equipped China with another 25% of earth’s population? They’re not about to renounce their communist dreams and eastern hegemony for the western myth of a New World Order. The same could be said about nuclear armed North Korea and Pakistan.

And what about Israel who now sees itself positioned as one of the top nuclear and technological nations in the world? Despite Israel’s close relationship with the U.S. she will never forfeit control or capitulate to western political influence that would limit her self-reliance. That would be irresponsible because she made that mistake once too often.

And let’s not forget Russia. How can we forget Russia? Russia and her allies have never had an interest in western ideals and especially not something like Biden’s new world order or the western notion of some “great reset.” Here come the nuclear bombs!

So when you think about it, over half the world holds an anti-western viewpoint. Get the picture here?

How is it possible then to look at the world condition and conclude we’re on the verge of a one-world government?

What Does Bible Prophecy Say

Secondly, does Bible prophecy teach we should anticipate a one-world government?

Jesus removed the possibility of a one-world government when he prophesied that there would be “wars and rumors of wars… and nations will rise against nations” (Mt. 24:6-7).

This prophecy would not make sense if there was only one government in the Tribulation. How could that work? How can there be war with only one government that is supposedly ruled by Antichrist? If the supposed “one-world” government controls everything and everyone, and if it controls 100% of earth’s economy, where do the military’s and finances come from for the outbreak of wars described all throughout the Tribulation?

At the outset of the Tribulation, God sends forth the “Four Horses of the Apocalypse” and the second horse is the red horse of war,

“And another, a red horse, went out; and to him who sat on it, it was granted to take peace from the earth, and that men would slay one another; and a great sword was given to him.”

The red horse prophecy announces that God is removing peace from the earth and replacing it with the continual spirit of war. The prophet Daniel adds, “wars are decreed unto the end” (Dan. 9:26) which in context points to the end of the Tribulation. War after war after war means lots of nations opposing Antichrist and trying to fend off the Caliphate from conquering them.

This may come as a surprise but, although he tries, Antichrist never has dominion over the whole world. You can read more about this HERE. 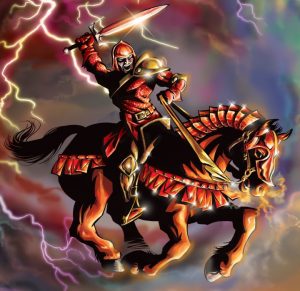