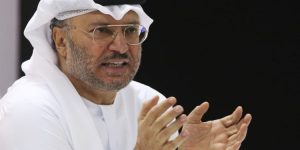 “The more strategic the Israelis look at these relationships, the more doors will open to them,” says UAE Foreign Minister Anwar Gargash. Normalizing ties with Israel “was strategically good for the UAE, will make it have more of a global presence.”

The United Arab Emirates didn’t need peace with Israel to counter Iran, a top UAE official said Friday, but he said Iran’s aggressive policies over three decades alarmed many Arab countries and made them look at their relationship with Israel “with fresh eyes.”

Iran’s actions have had an impact in the region, he said, though he wouldn’t speculate on whether other Arab countries would follow the UAE and Bahrain in establishing relations with Israel.

Looking back at the UAE’s decision to normalize relations with Israel, Gargash said the government decided it was strategically good for the country, “and will make the UAE more of a global presence.”

The Arab world and the region remain polarized, Gargash said, though “I would like to say we haven’t lost a single friend.”

The UAE minister called the Iranian reaction “very alarming.” And he called Turkey’s opposition to the agreement “pure hypocrisy,” accusing Ankara of “trying to take advantage of the Palestinian plight for narrow regional considerations.”

Palestinian President Mahmoud Abbas criticized the UAE and Bahrain for establishing diplomatic ties with Israel in his prerecorded speech to the General Assembly later Friday and called for an international conference early next year to launch a “genuine peace process.”

He also said the Arab experience of having no communication with Israel has not yielded any results, and he believes the actions of the two Gulf nations “bring a new dynamism” to the Israeli-Palestinian situation.