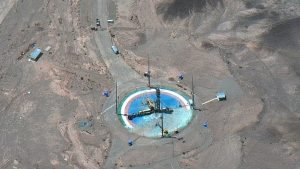 Iran acknowledged Wednesday it plans two tests for its new solid-fueled rocket after satellite photos showed preparations at a desert launch pad previously used in the program. Iran’s actions are taking place at a time when tensions remain high between Israel and Iran over Tehran’s rapidly advancing nuclear program.

Iran has been quiet lately, a little too quiet, and now we see why as they prepare to launch not one but two new solid-fueled rockets into Outer Space. Over in Israel, the IDF has been conducting very large, full-scale war simulations called ‘Chariots of Fire’ with related training for a pre-emptive strike on Iran to stop a nuclear attack.

13 The prince of the kingdom of Persia withstood me twenty-one days, but Michael, one of the chief princes, came to help me, for I was left there with the kings of Persia, 14 and came to make you understand what is to happen to your people in the latter days. For the vision is for days yet to come.”

When Obama and Biden were in office, they did everything they could to allow Iran to continue building its nuclear weapons program. The only thing it did was to speed it up. And because of that, Iran has been able to progress to the point where they are just about to announce they have functioning nuclear weapons.

The only reason it has taken the apocalyptic regime this long to reach nuclear readiness is because Israel has been waging a cyber and intelligence war with Iran to slow down their progress.

It almost seems inevitable that headlines might soon be reporting missiles flying between Tehran and Jerusalem.

When asked about Iran’s most recent provocations, State Department spokesman Ned Price told reporters in Washington that the U.S. urges Iran to de-escalate the situation.

Stay tuned on this one…