How Close Are We To The Rapture? 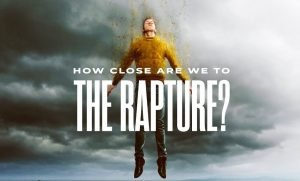 How Close Are We
To The Rapture?

8/5/22 by Tim Buck
Fotet.org
The Rapture—the raising of the Church into heaven (1 Thessalonians 4:17)—is the next event on the prophetic calendar.

Since we are living in the end of the church-age and under the shadow of the Tribulation, God is busy putting everything in place to prepare the world for the coming 7-year Tribulation period. The signs are everywhere!

Since the rapture precedes the Tribulation, key events and prophetic developments occurring today can serve as mile markers for gauging how close we are to the Rapture.

In our class this Tuesday I’ll be discussing two crucial signs that serve as benchmarks for how close we are getting to the Rapture and the Tribulation.

The first sign involves how close we are getting toward the ‘Two-State Solution.’ Remember, the Tribulation begins when Israel and the Palestinians sign a peace agreement affirming the Two-State plan and subsequently, the plan is confirmed by Antichrist (Daniel 9:27).

Put another way; How close are we to the Rapture if the Two-State Solution begins the Tribulation? I’d say very close… wouldn’t you?

According to the prophet Zechariah, another sign we should be watching, that sets the world stage for the Tribulation, is that the nations surrounding Israel will have both Judah and Jerusalem under some type of serious siege (Zech. 12:2-3).

The prophet Zechariah indicates there will be a major land controversy brewing in the last days resulting in an all-out tug-of-war over these two areas between Israel and her neighbors. As it develops, it spills over into an international dispute where nations having no legitimate right to the debate take sides. Then it goes out of control! (Zechariah Pt. 2 – Sept. 27, 2022)

To evaluate this ‘siege’ prophecy, we’ll need to discuss the 1967, 6 DAY WAR when Israel captured the so-called ‘West Bank’ from Jordan. That’s were the controversy began. Today, the nations are clamoring for Israel to give back the land they won in the ’67 war. Worse, they’re claiming that Israel stole that section of land from the good people they like us to call the “Palestinians” and must give it back. Is all this really what happened?

So here’s the question… is Judah and Jerusalem under siege today? How serious the siege has become is what signals how close we are to the Rapture. You may want to read Zechariah 12 to get some more background.

More about these two signs and how far into the peace process and siege process we are today will be discussed in detail Tuesday.

Although the stage setting is not fully complete, the Rapture can come at any moment and may be closer than we think!

Are You Ready to meet the Lord in the air?