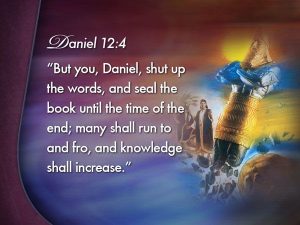 For 2500 years, Daniel’s prophesies have therefore been like a treasure locked up in a safe.

But God promised He would open the eyes of the final generation, our generation, to know their true meaning.

A few questions come to mind about this which are, what exactly does this mean, when did the “time of the end” begin and what will God use to open our eyes?

Must prophecy teachers, including myself believe that the “time of the end” began with the birth of Israel 75 years ago on May 14th, 1948. The miraculous birth of Israel caused many other prophesies to spring forth and be fulfilled.

So what is it that God will use to open our eyes in order to gain the fuller understanding He promised for Daniel’s prophesies?

Since 1948, God has been sovereignly orchestrating a series of events having the effect of breaking Daniel’s code and pouring out it’s contents for all to see. And the Lord is releasing understanding just as He promised.

But, insight is not automatic, and discernment eludes those whose hearts are not enlightened by the Holy Spirit. Jesus often taught through parables which allowed Him to speak to His sheep while those outside His flock remained oblivious (Matthew 13:13).

God’s prophetic Word works like that. Many grope in the darkness because they reject the light, but we who are in Christ “are not of night or of darkness” (1 Thessalonians 5:5). Jesus expects us to recognize the signs of the times (Matthew 16:2-3) and He has chosen to give us harbingers to offer insight — if we have eyes to see.

Can you think of any global events God has used in your life to open your spiritual eyes?

In the last two decades alone we’ve witnessed an explosion of signs and a global acceleration of divine revelation.

In the process, a rich new understanding of Daniel’s prophesies has begun to flow to the Church, and an additional understanding is meant for Israel to better face the dangers in the Tribulation.