THE PURGE: PARLER IS DOWN AND OUT AS APPLE AND GOOGLE THREATEN TO DEPLATFORM MORE SITES WHILE TWITTER PERMANENTLY SUSPENDS PRESIDENT TRUMP’S ACCOUNT.

AMERICA’S FREEDOMS ARE BEING TORN AWAY UNDER THE WEIGHT OF A DEMONIC HATRED WE’VE NEVER EXPERIENCED BEFORE 2021.

THE WARFARE IS REAL, CHANGE IS IN THE AIR AND TIME IS SHORT… THAT MEANS JESUS IS COMING SOON SO KEEP LOOKING UP!

Apple and Google have deplatformed Parler, a social network founded as a less moderated and more conservative-friendly alternative to Facebook and Twitter. Late Friday, BuzzFeed News reported that Apple has given Parler 24 hours to put a moderation platform into place or be expelled from its App Store. 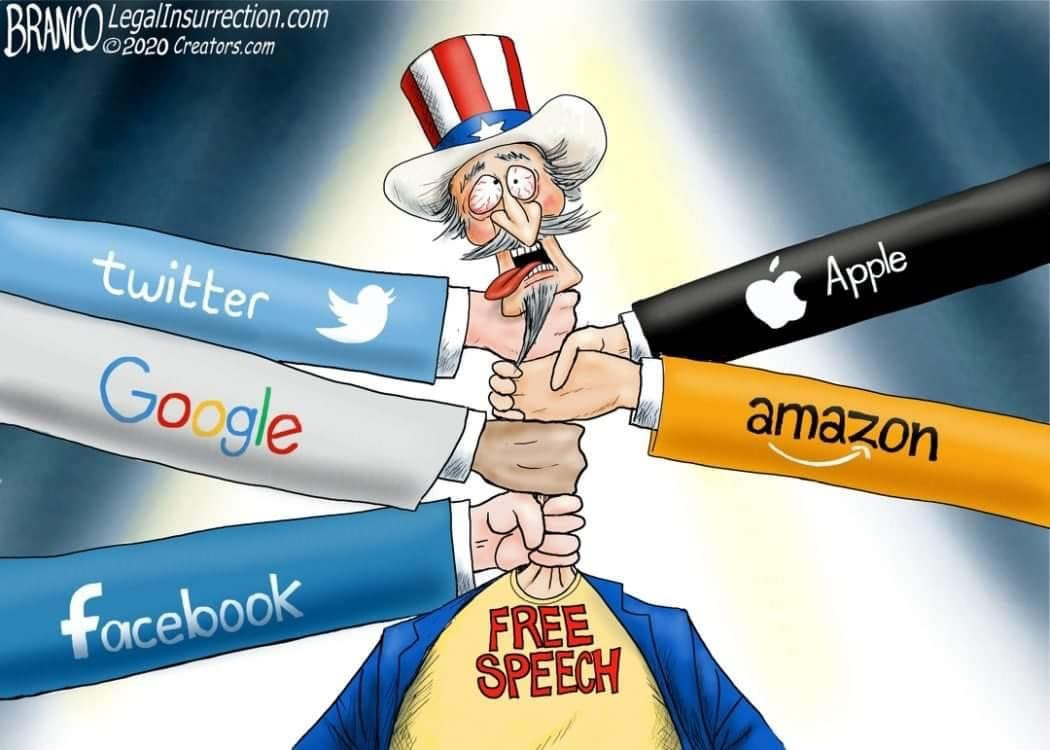 The Biden-Harris administration has not yet assumed power but their allies in Big Tech have wasted no time giving a preview of what their version of “unity” and “healing” will look like.

A few days ago, the upstart social media company Parler was an entrepreneurial success story worth somewhere around $1 billion. Today it’s not worth a nickel.

Poof. Just like that. It’s gone. Stripped of its very existence.

It happened just as President Trump was booted off Twitter, Parler’s main competitor, and Trump was moving his voice over to Parler.

Parler’s only sin was that it allowed Americans to freely voice their opinions about politics, about life as they saw it, something that has always been considered a sacred right, part of the fabric of the America. But in today’s environment, that’s considered dangerous.

But wait, you say. What happened to the First Amendment? Doesn’t that protect us against such treachery?

No, the left will counter, the First Amendment only applies to government suppression of speech, and social media giants like Twitter are private companies.

The narrative circulating everywhere in the mainstream media right now is that Parler was forced off the Internet by Apple, Google and Amazon because Parler had become an instrument of right-wing extremism to provoke violence at the Capitol last week. This is pure spin.

When a social media company makes its platform available to the public to post their opinions, they’re going to attract some bluster and blather.

It can get ugly real fast. Anyone who’s ever used social media knows this to be true.

And any thinking person also knows that the impolite, sometimes threatening rhetoric swings both ways. BLM and Antifa used Twitter to incite their people to violence in the summer riots that struck Minneapolis, Seattle, Portland, Atlanta, Washington, D.C. and Kenosha.

But it wasn’t just BLM and Antifa. More prim and proper folks also got down and dirty on Twitter.

In September 2020, Dick Costolo, the former CEO of Twitter, said in a tweet that certain capitalists who were not doing their part to promote social justice need to be the “first ones lined up against the wall and shot in the revolution.”

Jennifer Rubin, a columnist for the Washington Post, had a video posted to Twitter on Nov. 7, 2020, in which she suggested that an entire voting bloc of Americans should be eliminated. Rubin said:
“It’s not only that Trump has to lose, his enablers have to lose. We have to collectively BURN DOWN the Republican Party. We have to LEVEL THEM. Because if there are SURVIVORS, if there are people who weather this storm, they will [elect a president] again.”

Twitter never took down any of these tweets, nor does it censor or suspend Iran’s Ayatollah Khomanei when he rants about death to Israel and death to America. ISIS used Twitter as its main propaganda distribution service back in its heyday under the Obama’s administration. No complaints there.

Oh but Trump “incited a riot,” they say in hysterical tones and blistering headlines.
Really?

What did squad member Ayanna Pressley, D-Mass., do when she went on TV and called for “unrest in the streets” to continue as long as there is “unrest in our lives”?

Not long after Pressley’s explosive comment, Sen. Rand Paul and his wife were accosted by a leftist mob as they tried to walk back to their hotel from the Republican National Convention. No outrage was heard from our self-righteous media personalities then because the news didn’t fit the narrative about Trump being the greatest evil ever unleashed on America.

So when cities were being burned to the ground by BLM and the children of wealthy, white college-educated professionals living in posh suburban homes, CNN’s Chris Cuomo said “Show me where it says protests are supposed to be polite, peaceful.”

But when a few windows got broken at the Capitol and police opened the doors and waved the “rioters” right in, these same media hypocrites are outraged and calling for Trump’s head on a platter.

Rally participants are now being fired from jobs and hunted by the FBI, the same crooked law-enforcement agency that sat on evidence inside Hunter Biden’s “laptop from hell” for a year.

So spare us your fake outrage, all you lefties in the media.

As for the average Americans, if you believe the mainstream-media narrative that Parler was taken down because it had too many rude Republicans inciting violence, you’re kidding yourself.

It seems the real reason President Trump was locked out of his Twitter account started with a Jan. 7 statement from Michelle Obama, who used her Twitter account to gaslight the public and pressure Big Tech.

Michelle Obama referred to the president of the United States as a monster and to his supporters as a “gang.”

That set the ball in motion. Twitter, Apple, Google and Amazon made their move. They ganged up on Trump, with Twitter acting first to permanently ban him.

After Twitter removed Trump, and Trump moved to Parler, then Twitter’s Big Tech comrades at Apple, Google and Amazon pressured Parler to implement the same “community standards” as Twitter. Basically, Parler must become Twitter or go away. That’s extortion.

What we are seeing is tantamount to a digital ethnic cleansing. Or as some have called it, ‘the night the digital long knives came out’ and attacked the heart of America.

This goes beyond anti-trust violations. This falls into the realm of RICO racketeering and a criminal enterprise. But don’t expect justice from the DOJ, which remains a very politicized organization.

What Happens From Here?

If the left can shut down your business because of COVID, then change the voting system and steal your vote, then steal your First Amendment rights for simply expressing political views they don’t agree with, what’s next?

If they can do all this, why can’t they take your Second Amendment rights?

Why can’t they remove you from your home and take your property?

These are suddenly reasonable questions to be asking ourselves and our leaders.

Republicans are running for cover, many of them petrified of what the left will do to them if they don’t repent of their sin of at one time or another speaking or writing something favorable toward Donald Trump.

The outcome of this clash of good vs. evil is in the Lord’s hands. Sadly, many God-fearing, patriotic Americans are simply caught up in the middle with no place to go right now. Except One. Go to the One on the Throne. Do not lose hope in the Lord. Jesus Christ is our hope and salvation. Focus on Him and spend time reading His Word.

And most important of all, get down on your knees. America needs us now, more than ever.