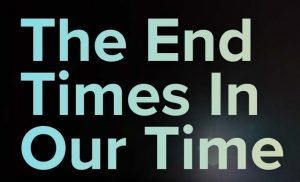 One of the reasons for reading the prophetic books of the Bible like Daniel and Revelation, and for studying Bible prophecy, is because of the clarity it provides to see where the world is headed and to see how the Bible describes the world in the last days.

Since we are living in the final hours of the church-age, much of today’s current events are written about in the Bible. God warns us as to what the morality and culture of the world will look like today!

God further provides us with the names of various nations we should be paying attention to who will play crucial roles against Israel in the last days. And those nations provide us with geography clues to help us better know the areas we should keep an eye on.

No one on earth has the advantage of this insight except Christian believers who take the Bible literally and study Bible prophecy in both the Old and New Testaments, comparing scripture with scripture.

Wars and Rumors of Wars

Wars and rumors of wars can be a frightening prospect to those who have no idea what’s coming. But for believers who have studied the Bible, the escalation of aggression we are seeing is just one more indicator that we’re drawing closer to the end.

The decline of the United States has been anticipated by students of Bible prophecy who expect that in the last days, just before the Tribulation, America will be weakened and become a shadow of her former greatness. America’s decline must come to the point where she will no longer be able to stand with Israel or rescue Israel in her hour of need.

God does not want the U.S. Pentagon to interfere with His redemptive plans for Israel which includes bringing Israel to the brink of extinction so that they’re self reliance is shattered enough to call on the Lord (Dan. 12:7).

The U.S. served the Lord as Israel’s big brother and protective superpower during the wars of 1948, 1967, 1973, 1984 and up to the last few years. But America’s mission of propping up Israel is coming to an end as Israel’s time to face the Lord alone is about to arrive.

Speaking of wars, what about a nuclear war? Based on Putin’s recent threats in Ukraine, should we be fearful that WW3 and a world-wide, thermal, nuclear holocaust is coming? Although it’s always a possibility, a careful study of Bible prophecy leads one to believe there may not be any major nuclear wars prior to the Tribulation for several reasons.

First, it doesn’t seem to make sense that God would have plans to wipe out millions of Christians just prior to the rapture of the church. The whole purpose of the rapture is for Jesus the groom to rescue His bride from the “wrath to come” (1 Thess. 1:10; 5:9).

Secondly, a pre-Tribulation nuclear holocaust doesn’t seem to fit God’s revealed plans to judge the world Himself. Just as He did in Noah’s day, the purpose of the Tribulation is for God Himself to end man’s rebellion on earth. For that purpose He has planned specific judgments of the worst kind recorded in Revelation 6-19 that include the prospect of nuclear war (Ezekiel 39:11-16; Zech. 14:12; Rev. 9:18). Based on this information, it doesn’t seem likely that a large segment of the world’s population would be wiped out just prior to the Tribulation judgments.

In addition to wars, Jesus foretold of the increase of deception, lying, hatred, lawlessness and even pandemics. All of these are increasing at a dramatic pace.

Why did Jesus tell us that we should expect all these horrible things to come? Was He trying to scare us? Doesn’t He know we are already prone to anxiety and worry? Yes He does. Our Lord knows us better than we know ourselves. It is precisely for that reason He foretold all these things.

End From the Beginning

God specifically planned the unique events that wind-down the church-age and that lead into the Tribulation period before the beginning of time (Isaiah 46:8-10; 48:3-5).

After planning the last days God then graciously tells us about His plans (Mk. 13:23), with more detail and clarity than most people realize. He especially does this through the Old Testament major and minor prophets (Amos 3:7) which are a priceless resource for us today although rarely taught. His prophesies are reminders to us that He knows the future and that He has every single detail under control.

God does all this to help prepare us, not to scare us, so we can recognize the signs and unusual happenings we’re seeing today in America and around the world and realize we’re living in the thrilling season just before Jesus returns.

In the midst of all His warning about the last days, He made it a point to assure us: “See that you are not troubled; for all these things must come to pass” (Matthew 24:6).

Over the years, I’ve recommended Bible students to get a study Bible like the MacArthur Study Bible (NKJV, Large Print). I recommend it because it never avoids explaining difficult prophecy passages and it usually comments on them by clarifying the context and providing cross references for better understanding. I suggest beginning reading through the Minor prophets (begin with Joel, Micah, Zephaniah, Zechariah 12-14) and reading the corresponding study notes below the text. This will open a fresh new resource about today’s world and provide the necessary means of discernment to better interpret tomorrow’s news.

What is the Biden Doctrine?

The Biden doctrine class will follow the prophetic impact of Biden’s moral and foreign policies and how they are accelerating last day prophesies about world events, Israel and the Middle East.

Over the last decade since Obama became president and declared, “America is no longer a Christian nation,” I’ve shared with close friends how I feel America is past the point of no return and that it would be wise for believers to anticipate and somehow prepare for national judgment.

I had no idea about what specific means God would use to release His judgment on America or how soon it would arrive. That changed for me when the Lord abruptly removed President Trump and replaced him with Joe Biden! America’s hour of trouble had arrived!

Knowing Bible prophecy enables us to see that God’s sovereignty and righteous judgment is now descending on America and is therefore allowing for the destructive path of the Biden Administration. God appoints world leaders for His sovereign purposes and there simply is no other biblical explanation.

There’s a lot of prophecy at stake on the conference tables of the State Department in Washington DC right now. Biden dividing Jerusalem and siding with the Palestinians and Iranians are just a few of the vexing issues destined to hurt America.