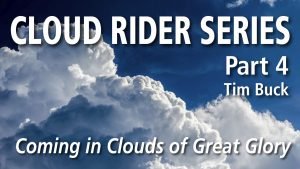 The Revealing of Jesus!

In this last article on the Cloud Rider Series, we will examine clouds in prophecy, and focus on the verses surrounding the return of the Lord.

On the last day of His public ministry, Jesus led the twelve apostles from Jerusalem up onto the Mount of Olives. After further instructing them, with no warning and right before their eyes, Jesus effortlessly lifted up off the earth in plain view of His stunned followers.

Now when He had spoken these things, while they watched, He was taken up, and a cloud received Him out of their sight.
Acts 1:9

As Jesus rose in the atmosphere a cloud enveloped Him and took Him out of their sight! This of course was no ordinary cloud. Like Elijah’s chariot, it was the supercharged vehicle to carry the Son back home to the Father.

As the apostles gazed into the sky, the angels that stood nearby gave the awe-struck followers a wonderful message of hope.

And while they looked steadfastly toward heaven as He went up, behold, two men stood by them in white apparel, who also said, Men of Galilee, why do you stand gazing up into heaven? This same Jesus, who was taken up from you into heaven, will so come in like manner as you saw Him go into heaven.
Acts 1:10-11

Just as the Cloud Rider ascended in a cloud; He will one day return in one. As such, this passage gives insight into the Day of the Lord when Christ returns again. Does it agree with other prophecies on this topic? Yes, it does, as Christ Himself prophesies in Matthew 24:

Then the sign of the Son of Man will appear in heaven, and then all the tribes of the earth will mourn, and they will see the Son of Man coming on the clouds of heaven with power and great glory.
Matthew 24:30

In Matthew 26, Caiaphas, the high priest, wants to sentence Jesus to death for blasphemy (Matthew 26:57–59). After several failed attempts, he finally challenges Jesus to answer whether He is the Christ—the Messiah—and the Son of God.

Jesus said to him, “It is as you said. Nevertheless, I say to you, hereafter you will see the Son of Man sitting at the right hand of the Power, and coming on the clouds of heaven.”
Matthew 26:64

Jesus’ words make direct reference to Psalm 110:1 and Daniel 7:13 leaving no doubt in the mind of Caiaphas that Jesus is claiming to be the eternal Messiah and Son of God.

Thus, Jesus pronounced He was messiah by referring to Himself as the ‘Son of Man,’ and associating Himself as the divine Cloud Rider from the familiar messianic prophecy of Daniel.

I was watching in the night visions, and behold, One like the Son of Man, coming with the clouds of heaven! He came to the Ancient of Days, and they brought Him near before Him.
Daniel 7:13

Finally, the apostle John adds his final witness to the Cloud Rider saying that Christ will break through earth’s atmosphere at His Second Coming with power and glory “riding” the clouds for all to see:

“Behold, He is coming with clouds, and every eye will see Him, even they who pierced Him. And all the tribes of the earth will mourn because of Him. Even so, Amen.
Revelation 1:7 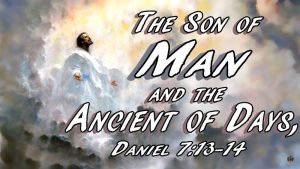 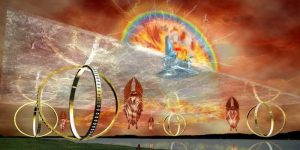