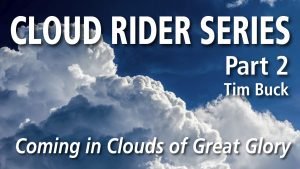 Hiding in the Cloud!

“Where the LORD goes, there are whirlwinds and storms, and the clouds are the dust beneath His feet.”

In Part One, we saw that God possesses His own cloud and He enwraps Himself in it.

“His cloud,” as David calls it in Psalm 18:12, is more than supernatural: It is positively spectacular, discharging not only rain but fire, not only hail but smoke.

From His magnificent yet terrifying cloud, God reveals His secrets to some according to His sovereign will, while hiding Himself from others according to the purposes of that same will. His cloud can aid in revealing Himself as easily as it can conceal Himself.

God is present in His cloud. It is no wonder, then, that so many scriptures associate His cloud with His glory.

It comes as no surprise then, that the glory of God in His cloud, also filled the Tabernacle:

As a parallel scripture, consider the description of the dedication of Solomon’s Temple:

The cloud at once announces God’s presence and obscures enough of His glory to protect humans from destruction. Our Creator-God wants to communicate with us in order to reveal Himself they we may know His ways. And to do that, He’s chosen to protect those to whom He appears to in order to more fully reveal Himself. Whether we want to think of the God-cloud as a manifestation of the shekinah glory or not, it is apparent that He is there, present in His cloud.

The gospels also link God’s glory to His cloud. A case in point is the Transfiguration:

While He was still speaking, behold, a bright cloud overshadowed them; and suddenly a voice came out of the cloud, saying, “This is My beloved Son, in whom I am well pleased. Hear Him!” And when the disciples heard it, they fell on their faces and were greatly afraid.
Matthew 17:5-6

Here as elsewhere, the cloud hides God so people do not succumb, overcome by the brightness of His glory. But the same cloud also provides the opportunity for the Father to reveal a truth He deemed important to the three disciples present on the occasion, namely, the opportunity to teach them that the words of His Son carried more weight than the words of Moses or the prophets (represented by Elijah).

After Christ’s resurrection, the apostle John, who was present at the Transfiguration, refers to this incident, connecting it with God’s glory:

And the Word became flesh and dwelt among us, and we beheld His glory, the glory as of the only begotten of the Father, full of grace and truth.
John 1:14

Years later, Peter, who was also present with the brothers James and John at the Transfiguration, likewise connected it with the glory of God:

For He received from God the Father honor and glory when such a voice came to Him from the Excellent Glory: This is My beloved Son, in whom I am well pleased.
2 Peter 1:17

Throughout scripture then, we learn with certainty that God’s cloud reflects His glory by virtue of the fact that He is present in it.

Keep an eye out for part three tomorrow. 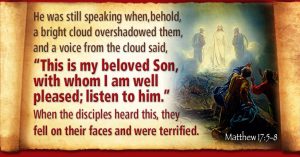