Cloud Rider Series, Pt. 1, No Ordinary Cloud! How God uses Clouds for His Glory and Presence 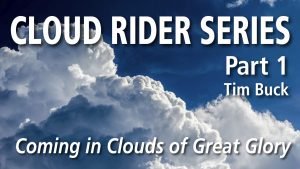 “God’s cloud led them on by day when they broke camp and set out.”

This week, as part of the Cloud-Rider theme in our upcoming class, I will share a multi-part series of articles on how God uses clouds for His purposes in the Bible. We’ll start in the Old Testament and work our way through the Bible up to Christ’s Second Coming.

The Scriptures utilize the imagery of clouds far more than we realize. They are often used to signal God’s presence and this is one of those biblical themes that has not been given due consideration.

Indeed there are over 150 references to clouds in the Bible and while a few refer to clouds in the natural sense such as pouring forth rain, most references have to do with God, His nature, His revelation, His judgment and His travel to return to earth.

As part of God’s creation, clouds teach us something about God’s nature and His power. We can go so far as to call them a custom-made emblem—that is, a made-to-order symbol—to express God’s glory. God’s Clouds are unique and often used to assist His characteristic of hiding information from some and revealing it to others, according to His sovereign purpose.

Not Your Everyday Clouds

Of God and his Salvation, David writes:

He rode on a cherub and flew; he came swiftly on the wings of the wind. He made darkness his covering, his canopy around him, thick clouds dark with water. Out of the brightness before him hailstones and coals of fire broke through His clouds.

Note David’s mention of “His clouds,” giving a personal connection to God with a special class of clouds. Numbers 10:34 refers to “the cloud of the LORD” while Ps. 68:4 declares, “The clouds God rides.” Like His mighty fleet of chariots (Ps. 68:17), it’s no exaggeration to assume God has a sacred fleet of clouds to use for His many purposes.

He lays the beams of His upper chambers in the waters, Who makes the clouds His chariot, Who walks on the wings of the wind.

The Lord has His way in the whirlwind and in the storm,
and the clouds are the dust of His feet.
Nahum 1:3

One of the most common purposes for God’s clouds is to protect His people (from Himself). That’s why God remained in a cloud over Mt. Sinai (Ex. 24:16) when speaking to Moses and the young nation of Israel. Similarly, that’s why He remained out of sight in the cloud by day during the wilderness wonderings (Numb. 10:34), to protect the people from His presence lest they die.

In the same way, the prophet Isaiah provides a good example about God’s protective cloud over Jerusalem as a place-of-safety during the Millennial Kingdom.

Then whoever is left in Zion (after the Tribulation) and whoever remains in Jerusalem will be called holy, everyone who is recorded among the living in Jerusalem. The Lord will wash away the filth of Zion’s people. He will clean bloodstains from Jerusalem with a spirit of judgment and a spirit of burning. The Lord will create a cloud of smoke during the day and a glowing flame of fire during the night over the whole area of Mount Zion and over the assembly. His glory will cover everything. It will be a shelter from the heat during the day as well as a refuge and hiding place from storms and rain.

What provides shelter, refuge, and a hiding place is not so much the “cloud of smoke” itself as it is the glory and presence of God inside the cloud over Millennial Jerusalem. God keeps us and protects us today in many ways but in the Millennial Kingdom worshippers that come to Jerusalem will be able to see His glorious presence in the cloud overhead which will always be there for their protection.

Keep an eye out for part two tomorrow. 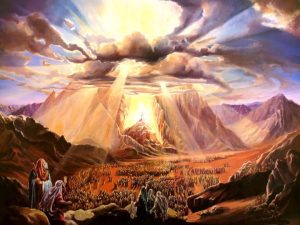 God remained hidden in the cloud as He spoke to Moses and the children of Israel on Mt. Sinai.

“And the glory of the LORD settled on Mount Sinai. For six days the cloud covered the mountain, and on the seventh day the LORD called to Moses from within the cloud.”
Exodus 24:16