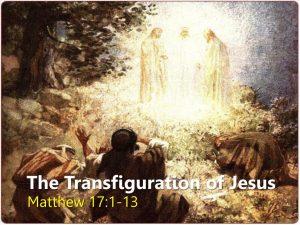 The Transfiguration of Jesus is the event when  Jesus is transfigured and becomes radiant in glory upon a mountain. The entire event points to the Millennial Kingdom and spells out God’s 7000 year plan for earth’s history.

Two of the four gospels make a point of telling readers that Jesus took his closest disciples to the Mount of Transfiguration “after six days” (Matt. 17:1, Mark 9:2).

There is no need for such specific time information (6 days) unless it hints at a larger truth–namely, that the end of the sixth day is linked to the Second Coming, when the Lord will appear in glory on the seventh day or year 7000.

When Christ was transfigured on the mount, two heralds of the Old Testament appear, Moses and Elijah. Together, they represent resurrected Israel who will rise at the beginning of the Kingdom (Daniel 12:3).

After seeing Moses, Elijah and Jesus talking together, Peter suggests building tabernacles (Mt. 17:4) because the time was near for the Feast of Sukkot or Tabernacles.

The Feast of Tabernacles is the annual celebration where God’s people are expected to build small huts or tents and live in them for seven days to commemorate God’s presence as Israel journeyed in the wilderness. Peter’s mention of tabernacles here is because the real story, behind the story is Christ in the kingdom age.

The Feast of Tabernacles here, is a foreshadowing of the Kingdom age where the Feast will be celebrated once again (Zech. 14:16-20) as Messiah Himself will “tabernacle” among His people for 1000 years.

In other words, Christ’s transfiguration on the mount was a “dress rehearsal” of the Kingdom age when He appears in glorious manifestation with his raptured bride (3 disciples-Church) and the Old Testament saints (Moses/Elijah) as King in the Millennial Kingdom.

The imagery here is clear and prophetic: Jesus’ disciples ascend to meet with the Lord and the OT resurrected saints to tabernacle with him at the beginning of the seventh day – the start of the Millennial Kingdom.