China In Bible Prophecy: The Rise of the Red Star and the Crescent. 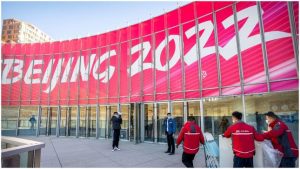 The Olympic Games in China are bringing athletes from five continents together to show sportsmanship, athleticism, friendship and respect to supposedly promote a better world. Unfortunately, behind the scenes China is reaching its tentacles into the Middle East through partnerships with anti-Western nations that will affect the outworking of end time events. So with the Red Star in the news so much, what does the Bible say about China’s role in Bible Prophecy? 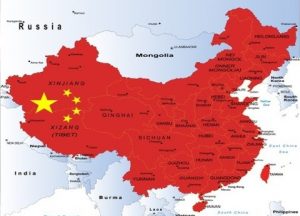 A demonstrator wearing a mask painted with the colors of the flag of East Turkestan (Muslim-majority area of Western China) and a hand bearing the colors of the Chinese flag attends a protest in the mostly Muslim Uighur minority on July 5, 2018 (Ozan Kose, AFP, Getty)

Since 2001, China (Red Star) has been mostly content to exploit diplomatic and economic opportunities in the Middle East (Crescent), while leaving military ventures to the United States, EU, and Russia. However, as the United States and its Coalition partners gradually draw down their military presence in the region, and as Chinese investment continues to increase across the Middle East’s volatile landscape, Beijing has subtly begun to assert itself into the Middle East.

Most recently, Iran and China have signed a 25-year agreement (June 24, 2020 in Beijing) for China to invest $400 billion in Iran’s economy over that time period in exchange for a steady and heavily discounted supply of oil from Iran. From a prophetic perspective, this likely will end up increasing the stability of the Caliphate and help bolster the Caliphate coffers!

Although Chinese state military expenditures have increased 800% in the last three decades to $245 billion US dollars in 2020, far above the Russian defense budget of $67 billion, China still lags far behind the US government’s $767 billion defense budget. Therefore, rather than engage its military directly in Mideast conflicts, the Chinese government prefers “lead from behind” partnerships, including arms sales, joint defense projects, security consulting, and intelligence sharing, as a means of buttressing existing regimes and maintaining the status quo.

Last month, China joined Russia in conducting a second round of joint naval drills with Iran in the Indian Ocean. The drills included the Iranian Revolutionary Guard Corps (IRGC) conducting naval interdiction exercises, at a time when the Iranian regime has repeatedly threatened to block Western commercial shipments through the Strait of Hormuz, and after repeated incidents of “close contact” between the US and Iranian navies.

As Western nations increasingly disengage from the Middle East, and as Chinese investment in the region continues to grow on all fronts, a question arises regarding the long-term consequences and prophetic implications of China’s Middle East trending in the end times.

If anything, the last two decades since 9/11 have shown that the Middle East is anything but predictable, and there is no biblically prophetic role for China by name.

However, we do know the general contours of the Mideast prophetic landscape at the end of the age, and there are at least three ways that China’s increasing engagement in the region may enable the biblical nations of the last-days to play out.

1. The substantial injection of Chinese wealth into the Middle East, which will only continue to increase in the coming decade, creates the economic means by which Antichrist, the “contemptible person” in Daniel 11 can eventually arise in the region “without warning” and “come into the richest parts of the province” before conducting the most successful and devastating military campaign in human history with a “great army” (revived Ottoman Caliphate). Economic partnerships between China and key Middle East players are bringing billions of dollars of military hardware, nuclear expertise and training in trade for China receiving oil, gas and natural resources to maintain their massive needs.

2. The Chinese effort to interlink Central Asia (the “Stans”) and the northern nations of the Middle East via the BRI lays the economic groundwork for an eventual “King of the North” politico-military alliance of 10 kings. The Belt and Road Initiative is a development strategy adopted by the Chinese government in 2013 to invest in countries and international organizations. If that alliance encompasses the historical territory of the Greek Seleucid dynasty described in Daniel 11 and Revelation 13, it will stretch from Turkey to Pakistan, and align with the territory of the beast empire. Thus improving infrastructure like roads, bridges, etc. ahead of the rise of the ten Caliphate nations.

3. The post-WWII order in the Middle East, which had previously fixed the position of Western powers in the region, and which was tied to diplomacy, has been gradually replaced by an amoral and self-serving Chinese form of politics. Unconcerned with modern notions of freedom and human rights, this new Sino-Mideast dynamic allows for the rise of Antichrist and the expression of his power, as long as it is good for business.

We know that Western nations, are represented by the “Ships of Kittim” in Daniel 11 and will not be completely impotent against the invasions of Antichrist, the King of the North. But according to Daniel 11, their intervention will only be a temporary check on his power, before his “rage” and demonic empowerment enable him to “do as he wills” (Dan. 11:36) in the nations at-large and inside the “Beautiful Land” of Israel when he invades at the mid-point of the Tribulation (Dan. 11:39, 45).

Ironically, it seems China will eventually have one of the most important roles to play in opposing Antichrist and his apocalyptic Jihad campaigns, before he brings the world to the brink of collapse. Just before the mid-point of the Tribulation, as Antichrist is returning from his successful African victories (Dan. 11:42-43) the angel speaking to Daniel says, “news from the East and North will alarm him” at the height of his reign.
But reports from the east and the north will alarm him, and he will set out in a great rage to destroy and annihilate many. He will pitch his royal tents between the seas at the beautiful holy mountain (set up his HQ on the Temple Mount). Yet he will come to his end, and no one will help him.

The prophecy shows the last two superpowers, China, and Russia (“east and north”) trying to stop Antichrist, the madman of the Caliphate one final time. This may be the last opportunity any nations on earth can possibly prevent world-wide collapse brought on by the tyrant.

What’s clear is that the two great powers have joined forces in a two-pronged assault and are heading into the Middle East theatre to try to end the madness of the Hitler-like invader. By now the economy has collapsed, food is scarce and resources are low so Russia and China launch WW3 in a last-ditch effort to prevent total collapse before it’s too late. It doesn’t work.
And he (Antichrist) will set out in a great rage to destroy and annihilate many (defeat Russia and China).

From day one of the Tribulation, the “man of sin” will bat 1000% because his authority comes from the Lord to “go forth and conquer” (Rev. 6:1-2). He cannot and will not be stopped until God’s purposes for Israel are fulfilled.

Therefore the only direct, Chinese military engagement in the Bible will end in failure as what’s left of the red army marches back home on the silk road in defeat. And ditto for Russia… it’s annihilated also.

Despite the uptick of prophetic interest for China these days, China’s role is very limited in Bible prophecy as even the “kings of the east” point to the 10-King Caliphate nations that are located east of the Euphrates and have nothing to do with oriental countries.

What we see in these matters is that the role of China (the red star) in the Middle East (the crescent) is prearranged by our Lord who continues to arrange the pieces of the eschatological chessboard.

Despite the aspirations and financial efforts of China, Russia, the E.U. or the USA, the Lord’s endgame is already decided, as He prepares to gather the nations to the Valley of Megiddo for the Day of the Lord’s judgment on the nations and His promised redemption of Israel!

Even so come, Lord Jesus