Here we see the demonic nature of BLM as they spew hatred for Jesus and pause to respect Allah. 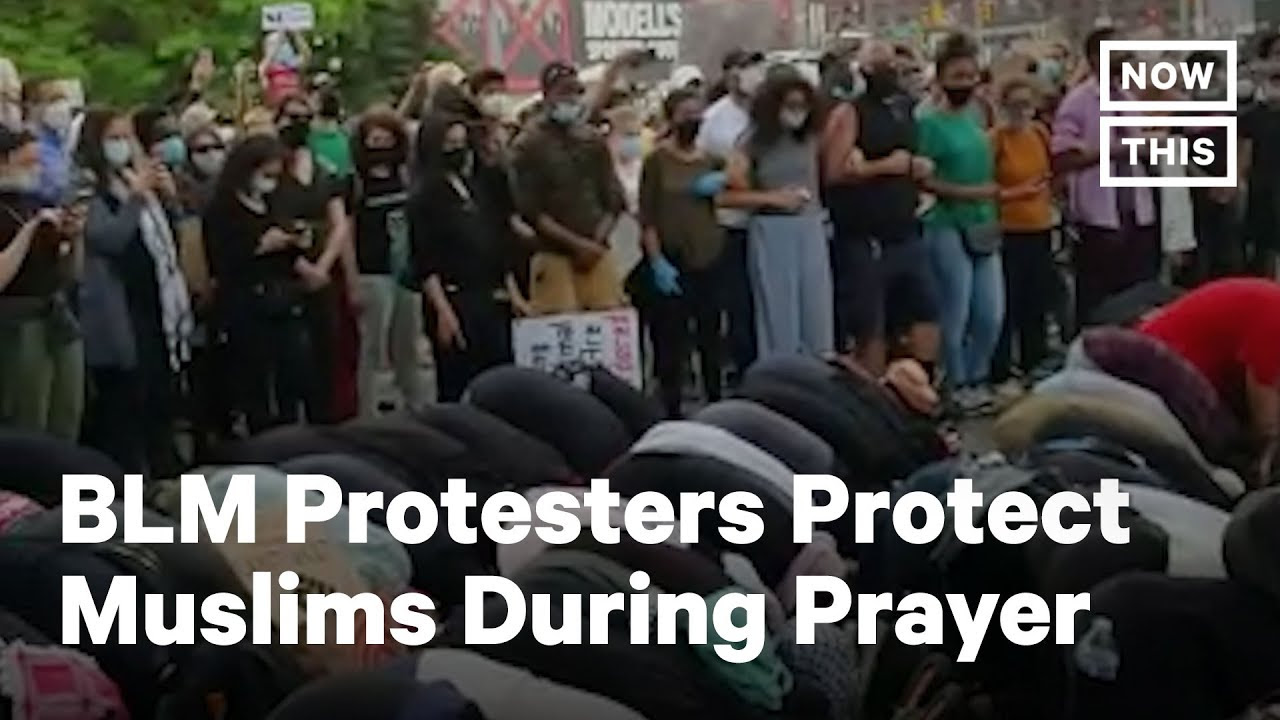 Muslims were able to stop traffic and pray safely in the middle of the street during a Black Lives Matter protest in Brooklyn after hundreds of BLM people formed a protective circle.

“Watch out for deceiving spirits

and things taught by demons.”

As if rioting, looting, vandalizing statues, assaults and murders weren’t already enough to stop placating the godless Black Lives Matter protests – you can now add assaulting Christians who were peacefully praying at a demonstration and add protecting Muslims during their call to prayer as acts pointing to the demonic nature of BLM protests.

Because nothing says you’re against police brutality more than attacking Christians who were simply praying.

One would think this is a picture in a Muslim country like maybe Egypt or Jordan. I’ve been in Middle East countries many times when everything stops for the call to prayer. But this is in New York not the Middle East. And what stops is not just a group of inter-city Muslims for the call to prayer but the entire Black Lives Matter demonstration stops to protect the Muslims who are blocking traffic by praying in the street.

In one instance, BLM demonstrators are seen beating Christians but here in New York they are stopping to show solidarity while the Allah worshippers adhere to the Muslim call to prayer.

What better illustration revealing the demonic nature of Black Lives Matter than seeing BLM demonstrators surround and protect Muslims as they pledge to Allah?

I wonder what would happen if a similar sized group of Christians with Bibles decided to get down on their knees in the middle of the street for 10 minutes right in front of a Black Lives Matter demonstration? Yeh.

Jesus never owned slaves, nor did he ever advocate owning slaves. And it was seventeenth Century Christian abolitionists that started the drive to eliminate slavery, and the American Civil War finally ended it. Not in the entire world, just in Europe and North America.

Slavery is still very much held throughout the Muslim world because slavery is an accepted part of the religion of Islam. The website, The Religion of Peace, just published an article giving chapter and verse to this truth.

In the “Religion of Peace” website and article, there are citations to a number of authenticated Islamic stories about Muhammad and the slaves he owned.

The war being waged in the streets across America is not about Republicans versus Democrats or liberals versus conservatives.

I hear a lot of pundits warning this is about a communist takeover of America and others claiming this is a planned sequence of events by globalists pushing us toward a one-world government. While many people would like for those things to happen, that’s not what’s behind the shaking of America and the world in 2020.

America is in a

Don’t be confused about

who the enemy is.

Satan needs to knock America off its super-power pedestal, push her to the side and begin it’s persecution of Israel.

Satan knows his time is short and 2020 can be a turning point in the devil’s quest to topple America. America is God’s last Christian nation on earth and the only country standing with Israel. So it’s a big target!

Satan wants to snuff out the light of the gospel shining forth from our shores and replace it with the Antichrist spirit of darkness as soon as possible. As America goes… so goes Israel.

The enemy has successfully closed down the work of the Lord. It’s time to rise up, speak out, gather for prayer and fellowship and be the salt and light we so desperately need right now.

This is a desperate time and God needs His people to stand up and be counted for such a time as this!